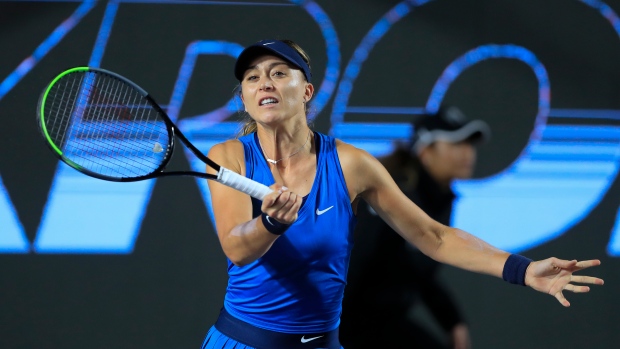 GUADALAJARA, Mexico (AP) — Paula Badosa extended her winning streak to eight matches on Saturday with a 7-6 (4), 6-4 victory over Maria Sakkari to qualify for the semifinals at the WTA Finals.

After edging Sakkari, the 23-year-old from Spain had to wait for the result of the late match between Iga Swiatek and top seed Aryna Sabalenka, who prevailed 2-6, 6-2 and 7-5, to see if she advanced to the semifinals as the top player in her group.

“It was quite a tough match. I served well. I fought for every point. I knew was going to be a battle against Maria”, said Badosa. “I think I stayed aggressive. I was moving well. When you win these kind of matches you have to do a little bit of everything well”.

The WTA Finals, canceled last year because of the pandemic, are played in a round-robin format with the top two players from each group of four moving on to the semifinals. Anett Kontaveit has already secured a semifinal place after winning both her opening matches in the other group.

The semifinals will be played on Tuesday and the final is set for Wednesday at the Centro Panamericano de Tenis in Zapopan, a suburb of Guadalajara, the second largest city in Mexico.

Badosa, ranked No. 63 a year ago, is having a breakthrough season. She won the first two titles of her career in 2021 (Belgrade and Indian Wells) and is among the six players to have made their top-10 debut this season.

“To be honest, I’m quite new. I was 70, 80 in the world at the beginning of the year. I think I got my first top 10 win maybe four months ago, and I needed experience”, Badosa said. “When I got that experience, all of that things, it went well. I think I’m quite competitive. I think I needed a little bit to adjust myself, to be here and play these kind of matches, to learn”.

Swiatek, Sakkari, Kontaveit and Barbora Krejcikova, all of them playing at this tournament, are the others along with Ons Jabeur who narrowly missed out on a place in Guadalajara.

“I think it was a very high-level match from both of us. Even though I lost, that gives me a lot of confidence for my last match in the round-robin”, said Sakkari.

“I haven’t seen any combinations or anything. I know that I’ll give myself a better chance if I win the next match. I’m just going to focus on that. Anything else, it’s just irrelevant at the moment.”

Sakkari will play Sabalenka on Monday for the last remaning semifinal berth.

“Maria is a tough opponent and a great fighter, it´s always big battles against her”, Sabalenka said. “I´ll do my best, I won´t give up like I did in my first match”.

Sabalenka is the first seed in Mexico because world No. 1-ranked Ash Barty of Australia decided not to defend her WTA Finals title due to continuing COVID-19 travel and quarantine restrictions.

Barty had to undergo two weeks of quarantine when she returned to her Brisbane home in September after the U.S. Open and did not want to do the same again traveling to Mexico.

The WTA Finals are being played in Guadalajara for this year only, with the event scheduled to return in 2022 to Shenzhen, China.