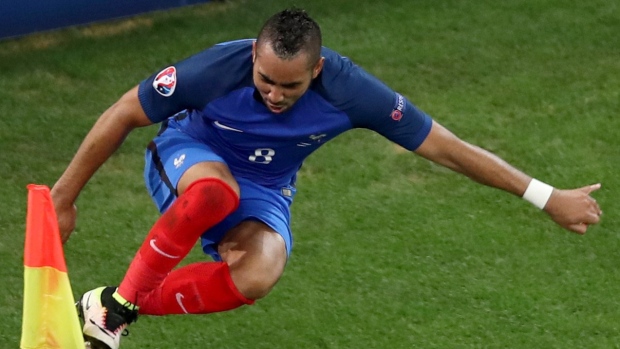 PARIS — Dimitri Payet was left out of France's 23-man World Cup squad on Thursday, a day after being injured during Marseille's Europa League final defeat by Atletico Madrid.

He has a thigh problem that will need at least three weeks to heal, a delay that prompted coach Didier Deschamps to omit the former West Ham player.

Unveiling his squad on French TV, Deschamps said he had no choice but to leave out Payet.

"Without his injury he would have been a serious candidate for the 23-man list," Deschamps said. "This is a muscular injury, with a risk of a relapse."

Payet has been in impressive form with Marseille. He is the French league's top playmaker this season with 13 assists, and claimed three goals and seven assists in the Europa League, starring in the quarterfinals and semifinals.

France, runner-up at the European Championship two years ago, opens its World Cup campaign against Australia on June 16. It meets Peru five days later and closes the group stage against Denmark on June 26.

Most of the squad were expected to be selected. The biggest surprise came with the inclusion of Sevilla's holding midfielder Steven Nzonzi, who was preferred to Paris Saint-Germain's Adrien Rabiot.

"Steven has technical skills and an imposing height, he plays in the same fashion as N'golo Kante," Deschamps said. "And Adrien's performances with France are not at the same level as those he delivered with PSG this season."

In defence, Djibril Sidibe and Benjamin Mendy were included after recovering from injuries.

Mendy only returned to competition in April with Manchester City but his influence on the left flank is such that Deschamps was not even tempted to overlook the former Monaco left back.

In the heart of the defence, Marseille's Adil Rami took advantage of Laurent Koscielny's Achilles injury as he was included alongside regular starters Samuel Umtiti and Raphael Varane.

Deschamps also named 11 reserves who won't be joining France's training camp next week but could be called up in case of injury.

Manchester United forward Anthony Martial and Arsenal striker Alexandre Lacazette were not included in the squad but are among the reserves.

Real Madrid striker Karim Benzema, who has a strained relationship with Deschamps and also missed Euro 2016, did not make the cut despite being regarded by many as the best French forward of his generation.