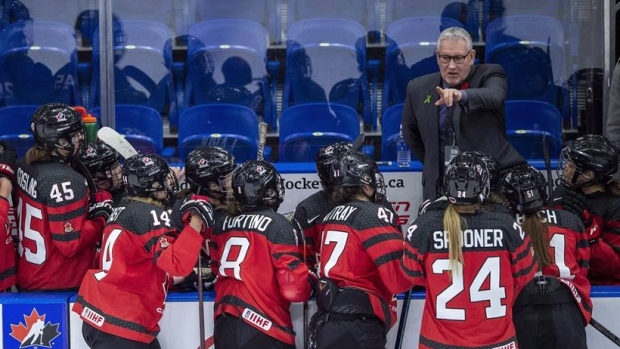 CALGARY — Perry Pearn is out and Troy Ryan is in as head coach of the Canadian women's hockey team in a mid-season change.

"Sometimes you respond differently to different leaders and I think this was the change this particular group needed," Kingsbury told The Canadian Press on Thursday.

Pearn, who came in with 21 years of experience as an assistant coach in the NHL, went 10-7 behind the Canadian women's bench after he was named head coach prior to the 2018-19 season.

The Canadians were upset by host Finland in the 2019 world championship semifinal and did not play the United States for gold for the first time in the history of the tournament.

"Perry had brought a tremendous amount to our program, experience, a ton of hockey knowledge," Kingsbury said. "He's changed some of our identity of a group. He's brought some great ideas to the forefront.

"We certainly don't regret having him on board for the past year and a half. Sometimes, someone else needs to be crossing the finish line."

Ryan from Spryfield, N.S., will be at the helm for February's three Rivalry Series games against the U.S., as well as the world championship in his home province March 31 to April 10 in Halifax and Truro, Kingsbury said.

"We'll re-evaluate after this year to see what it looks like for Beijing in 2022," Kingsbury said.

"We would like to name our coaching staff after this world championship for Year 3 and Year 4, so we have some consistency moving into the Olympics.

"We're looking at the next four months and trying to get this team as prepared as possible to compete on home soil at a world championship."

The Americans have won eight of the last 10 world titles, including five straight gold. Canada last won a world championship in 2012.

Hockey Canada made Ryan head coach with Pearn his assistant in a pair of November exhibition games against the Americans, which Canada won 4-1 and 5-2 in Pennsylvania.

"Results always play a factor if our athletes are responding the way we want them to respond," Kingsbury said. "Obviously the Hartford-Moncton series definitely didn't go our way. I don't want to compare because they were two separate events, different athletes were part of it and were under different circumstances.

"I do think our athletes responded really well to Troy's style of managing them on the bench and I really love the way we did play in Pittsburgh. I just think there's something there with Troy that will really allow us to bring this group to the next level."

The remaining Rivalry Series games are Feb. 3 in Victoria, Feb. 5 in Vancouver and Feb. 8 in Anaheim, Calif. Canada's roster will be announced later this month, Kingsbury said.

Ryan, 47, has been on the national women's team's coaching staff since 2016 including the 2018 Winter Olympics in Pyeongchang, South Korea, where Canada settled for silver in a shootout loss to the U.S.

Pearn joined the staff as an assistant to Laura Schuler just prior to the 2018 Winter Games. The 68-year-old from Stettler, Alta., was promoted to head coach later that year.

This report by The Canadian Press was first published Jan. 9, 2020.