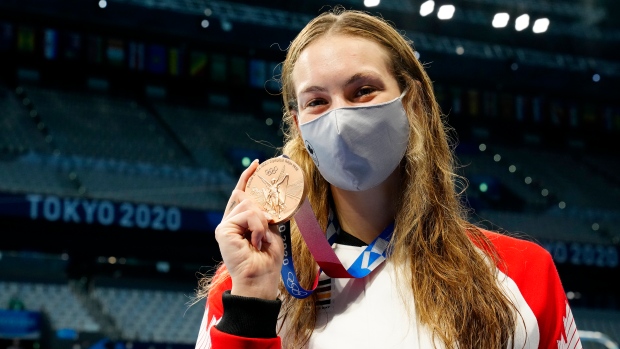 Canada's most decorated summer Olympian doesn't have much time to rest and take it in.

Penny Oleksiak swam into Canada's record books on Wednesday after winning a bronze in the women's 200-metre freestyle. Her sixth career medal is the most for any Canadian in the Summer Games, and ties her for tops overall with speedskater Cindy Klassen and speedskater/cyclist Clara Hughes.

And, with several races left to go in Tokyo, the 21-year-old Oleksiak isn't done yet.

Next on her list is trying to defend the gold medal she won in the women's 100-metre freestyle. She's also expected to swim in two more relays.

Oleksiak's bronze surpassed the five medals of rowing's Lesley Thompson-Willie and track and field's Phil Edwards. She adds it to the silver she won as part of the women's 4 x 100 freestyle relay team on Sunday, and the four she won in Rio de Janeiro as a 16-year-old.

Five years after that initial burst of success, Oleksiak made it clear she hasn't lost her love of racing on the world's biggest stage.

"I just love the Olympics," Oleksiak said. "I think they're so fun. Just knowing the whole world is watching is super crazy."

During Wednesday's race, Oleksiak led at the first turn, but was fourth at 150 metres. She fought her way back into podium position and held off a late push by China's Junxuan Yang to touch the wall in one minute 54.7 seconds. Australian Ariarne Titmus won gold in Olympic record time of 1:53.5, while Siobhan Bernadette of Hong Kong captured second at 1:53.92.

Oleksiak's initial reaction after touching the wall to win a historic medal?

"My legs are killing me right now!" she said with a laugh.

Oleksiak's medal was the fourth produced by the Canadian women's swim team in as many days following the relay silver, Maggie Mac Neil's butterfly gold and Kylie Masse's backstroke silver.

At the Olympics there are all kinds of victories, and not all of them result in medals or the kind of dominance Oleksiak has enjoyed.

Jessica Sevick and her partner Gabrielle Smith had a disappointing sixth-place finish in the final of the women's double sculls, crossing the line more than 12 seconds off the winning boat's time despite putting up the fourth-fastest time in the competition's semis.

As a child 20 years ago, Sevick suffered a traumatic brain injury on the luge track at Calgary's Olympic Park. Her parents were told she might not survive or, if she did, could be severely disabled.

Even as she fought back tears of disappointment on Wednesday, Sevick acknowledged the daunting odds she'd overcome to be there at all.

"It's just hopefully a message not to ever be limited by your circumstances," she said. "And that any sort of physical disability, or something that you can't control that happens to you, is not something that has to define you."

Another sort of victory went to canoe racer Haley Daniels, who became one of the first women to compete in women's canoe slalom after fighting for years to have the sport included in the Olympics.

The 30-year-old from Calgary didn't advance out of Wednesday's qualifying heats of the women's C-1 event, but made history just by getting into her boat. Daniels was among a group of international paddlers who pressured the International Canoe Federation for gender equity in the Olympics.

In 2017, the International Olympic Committee announced it was replacing some men's paddling events with women's.

Other Canadian athletes in action on Wednesday included boxer Tammara Thibeault, who will advance to the quarterfinals after winning her middleweight bout against Nadezhda Ryabets of Kazakhstan. Fellow Canadian Caroline Veyre was eliminated in the women's featherweight quarterfinals.

In the pool, Sydney Pickrem of Clearwater, Fla., was sixth in the 200-metre individual medley.