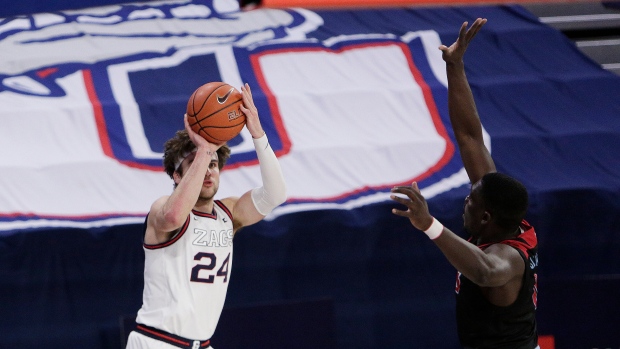 SPOKANE, Wash. (AP) — Corey Kispert made six 3-pointers and finished with 24 points, and No. 1 Gonzaga remained the only unbeaten in the country with a 86-69 win over Loyola Marymount on Saturday night.

The Bulldogs (24-0, 15-0 WCC) won their 51st straight home game to set a school record and finished off a perfect regular season. Gonzaga has won 28 straight games dating to last season and is the first team to finish the regular season unbeaten since Kentucky in 2014-15.

The Bulldogs are the only remaining unbeaten in Division I after No. 2 Baylor lost at Kansas earlier Saturday. Gonzaga now gets a lengthy break before the West Coast Conference tournament begins.

Kispert rediscovered his shooting touch from deep that had been a bit off of late. Kispert was 6 of 20 on 3-pointers during a five-game span earlier this month. But he hit 3 of 8 in the Bulldogs win over Santa Clara on Thursday and was even better in likely his final home game at The Kennel.

Kispert made 6 of 10 shots from deep against the Lions, and the Bulldogs shot 53% from behind the arc.

For the second straight game, the Bulldogs were pushed early. Loyola Marymount led by as many as five points midway through the first half before Gonzaga closed the half on a 12-3 run to take a 40-30 lead at the break.

The Lions saw the lead evaporate after Keli Leaupepe picked up his third foul with 5:59 left and LMU leading 23-22. Gonzaga outscored LMU 63-47 over the final 26 minutes.