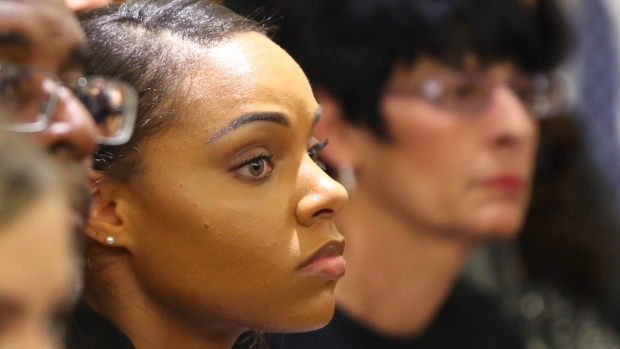 Shayanna Jenkins had pleaded not guilty. Prosecutors had said she lied dozens of times to the grand jury that investigated the death of Odin Lloyd, who was dating her younger sister. Hernandez was convicted of first-degree murder in Lloyd's killing last month.

Prosecutors asked a judge to dismiss the charge in a filing Thursday, citing Jenkins' testimony in Hernandez's trial in March.

On Friday, in a hearing that lasted just minutes, Superior Court Judge Susan Garsh agreed and dismissed the charge.

Outside court, Jenkins said, "I'm feeling great. I'm happy to start my future with my daughter and move forward."

Jenkins and Hernandez have a 2-year-old daughter together.

When asked if she and Hernandez were still together, Jenkins said, "Eh" and grabbed her large diamond engagement ring and twisted it. She quickly cut questioning short and walked away, not answering when asked if she has spoken with Hernandez.

At the time of Lloyd's killing in June 2013, Hernandez had a $40 million contract with the Patriots as one of their star tight ends.

Hernandez was sentenced to life in prison without the possibility of parole.

Jenkins' lawyer, Janice Bassil, said outside court that the perjury charges should never have been brought.

"She made an honest mistake," Bassil said.

Gregg Miliote, a spokesman for the district attorney's office, said prosecutors disagreed with the contention that the charges never should have been brought. He said the office moved to drop the charges because she later co-operated more fully at trial.

"As a result of her more truthful testimony at trial, we could not in good faith continue the prosecution in this case," he said.

Bassil has said Jenkins was bombarded with 1,630 questions over two days before a grand jury and didn't wilfully lie.

Prosecutors had said Jenkins repeatedly lied in testimony, including about getting rid of a box from the basement of her and Hernandez's North Attleborough home at his request. They say Jenkins told grand jurors she couldn't recall where she threw out the box, which she put in a trash bag along with baby clothes.

Prosecutors have said the box may have contained crucial evidence, even the murder weapon, which was never found.

In papers filed this week, Hernandez's lawyers asked Garsh to throw the conviction out, arguing that "no rational jury" could have found his guilt beyond a reasonable doubt.

"Rather, improper speculation, conjecture and guesswork was required to reach a guilty verdict," they wrote.

They also argue that even if there were enough to support a murder conviction, the judge should reduce it to second-degree murder because there wasn't enough evidence that he acted with extreme atrocity or cruelty. A second-degree conviction would allow Hernandez to be eligible for parole after 15 years.

The motion for a required finding of not guilty preserves Hernandez's right to appeal. Under Massachusetts law, all first-degree murder convictions are automatically appealed.

Prosecutors have 30 days to respond.

Miliote said Friday that an appeal could take years.

Also this week, Bristol County Superior Court Judge Richard Moses temporarily barred the sale of Hernandez's 2005 Hummer. The vehicle turned up for sale at a used car lot in Wrentham this month.

Moses is overseeing a lawsuit brought by Ursula Ward, Lloyd's mother. Her lawyers have been trying to track Hernandez's assets.

In court documents, Ward's lawyer says there is a substantial likelihood she'll win more than $5 million in the case, and they asked the court to issue a preliminary injunction barring the Hummer's sale.

The judge set a hearing for May 21.