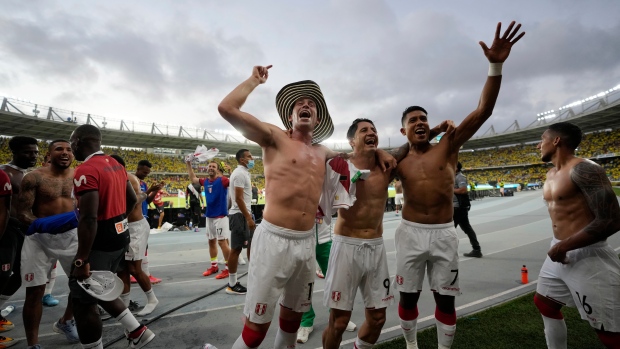 SAO PAULO (AP) — Edison Flores scored in the 85th minute, and Peru beat Colombia 1-0 on Friday for a key road win in its bid for a second consecutive World Cup appearance.

Flores lifted his country to a third consecutive victory in South American qualifiers. He beat David Ospina with a shot between the Colombian goalkeeper and the right post.

It was Peru’s fourth shot on goal for the game.

Peru plays again Tuesday at home against third-place Ecuador, which can secure its ticket to Qatar with a victory.

Coach Ricardo Gareca agrees Peru scored a key win at Colombia, but insists his team will face three finals until the end of qualifying.

“We know we depend on our efforts and this team has to fight in each final. We have another one on Tuesday, and we are ready for that. We are facing tough teams that are also in need (of points)," Gareca said. After Ecuador, Peru will take on Uruguay away and Paraguay at home in the end of March.

Colombia wasted 30 opportunities against Peru. Coach Reinaldo Rueda's team has not scored for more than 450 minutes in South American qualifiers, which led fans to boo after the final whistle.

“This streak is unexplainable,” Rueda said in a press conference. “When they have opportunities to score, the goal is closed. There's nine points left and we have to play for them.”

Next up is another tough match Tuesday at second-place Argentina.

Also Friday, Salomon Rondón led bottom-of-the-table Venezuela to a 4-1 victory over Bolivia. The striker scored in the 25th, 35th and 67th minutes.

Darwin Machis also scored for Venezuela. Bolivia got its only goal from Bruno Miranda in the 38th minute.

South America has four direct World Cup spots, and the fifth-place team will play an international playoff against an Asian rival for a berth. There are three more rounds to be played.

Brazil (36 points) and Argentina (32) have already qualified. Ecuador has 24 points, four ahead of Peru. Uruguay is now at 18 points in fifth place, with Colombia one point behind. Chile has 16, one more than Bolivia. Paraguay has 13 points, and Venezuela is up to 10.