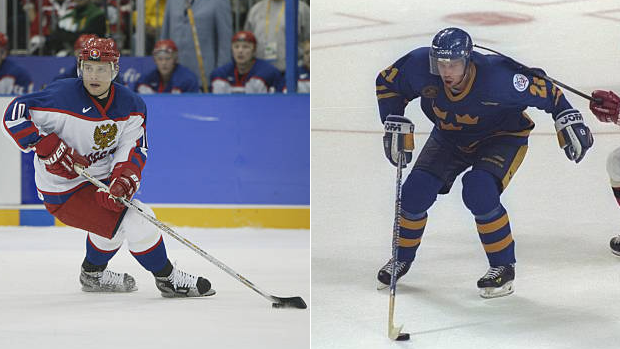 The greatest scorer and the greatest goal-scorer in World Junior Championship history.

It was fitting that TSN balloting to determine the tournament’s greatest player was a faceoff between the two greatest offensive forces.

TSN asked a panel of 12 international World Junior experts to vote on the 25 best players in tournament history to mark the 45th anniversary of the event.

Peter Forsberg and Pavel Bure finished one-two in balloting, separated by a single voting point. Bure had more first-place votes – five to three – but Forsberg had six second-place votes to just one for Bure, giving him a victory that withstood several recounts.

The cases for both are unimpeachable.

Forsberg may have only struck silver twice with Sweden but he set the gold standard for individual performance, averaging a jaw-dropping three points per game during his World Junior career. He earned a record 42 points in 14 career games (1992-93)​.

Even if you remove Forsberg’s 10-point game against Japan in 1993, he still had 32 points in 13 total games, including five games of at least four points on the way to a tournament-record 31 points in 1993.

Bure, meanwhile, launched a Hall of Fame career as the Russian Rocket with three dazzling performances, scoring a record 27 goals in 21 career games (1989-91). He made history, becoming the only player to average a goal per game in each of three tournaments. Bure scored goals in an amazing 16 games, failing to record a goal just five times.

Completing the top five is a trio of world junior superstars:

- No. 3: The Soviet Union’s Viacheslav Fetisov set the bar so high over the first two official events in 1977 and 1978, it would never be cleared. He won two gold medals and two Best Defenceman honours, becoming the first and only blueliner to achieve a double-double.

- No. 4: Team Canada’s 16-year-old Wayne Gretzky introduced himself to the hockey world in 1978, highlighted by a never-to-be-forgotten six-point performance versus Czechoslovakia on Christmas Day. Gretzky had 17 points in six games in his only tournament appearance.

- No. 5 Jordan Eberle was the model of consistent brilliance for Canada, ranking as one of only four players in tournament history to average one goal and two points over a World Junior career of at least 10 games. The ultimate pressure performer, Eberle scored 10 goals in six games spread over two New Year’s Eve showdowns versus USA and four playoff games that ultimately resulted in gold and silver for Canada. 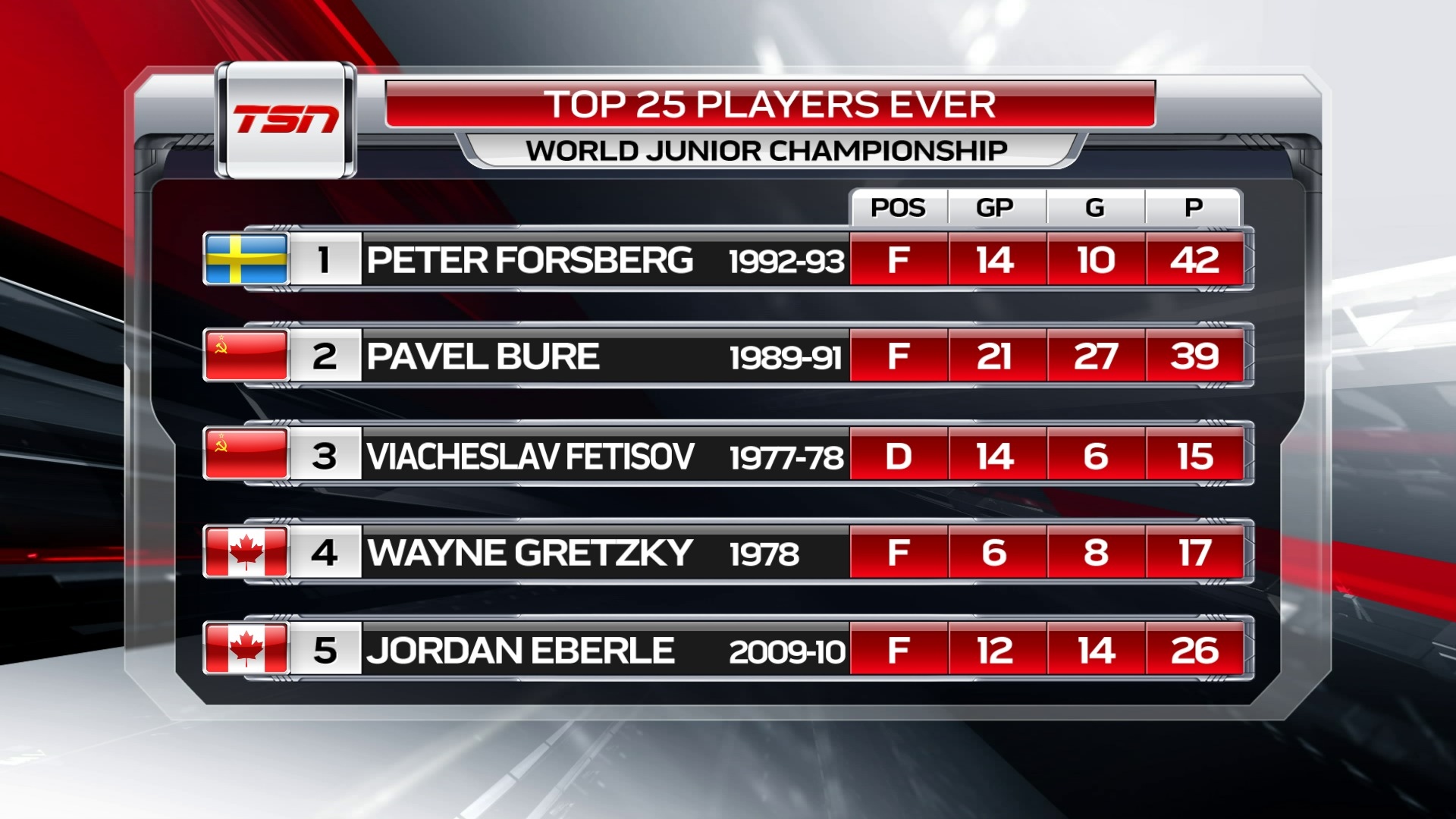 Canada and Russia (or the Soviet Union) have combined to win 31 of 44 gold medals in World Junior history, so it shouldn’t surprise they account for four of the top five players and share the lead overall with eight players each on the TSN Top 25.

The next two Canadians on the all-time list are No. 9 Eric Lindros, Canada’s all-time leader in points (31) and No. 12 Carey Price, the highest-ranked goalie who set the highest all-time single tournament save percentage (.961) in a 2007 gold medal-winning performance. 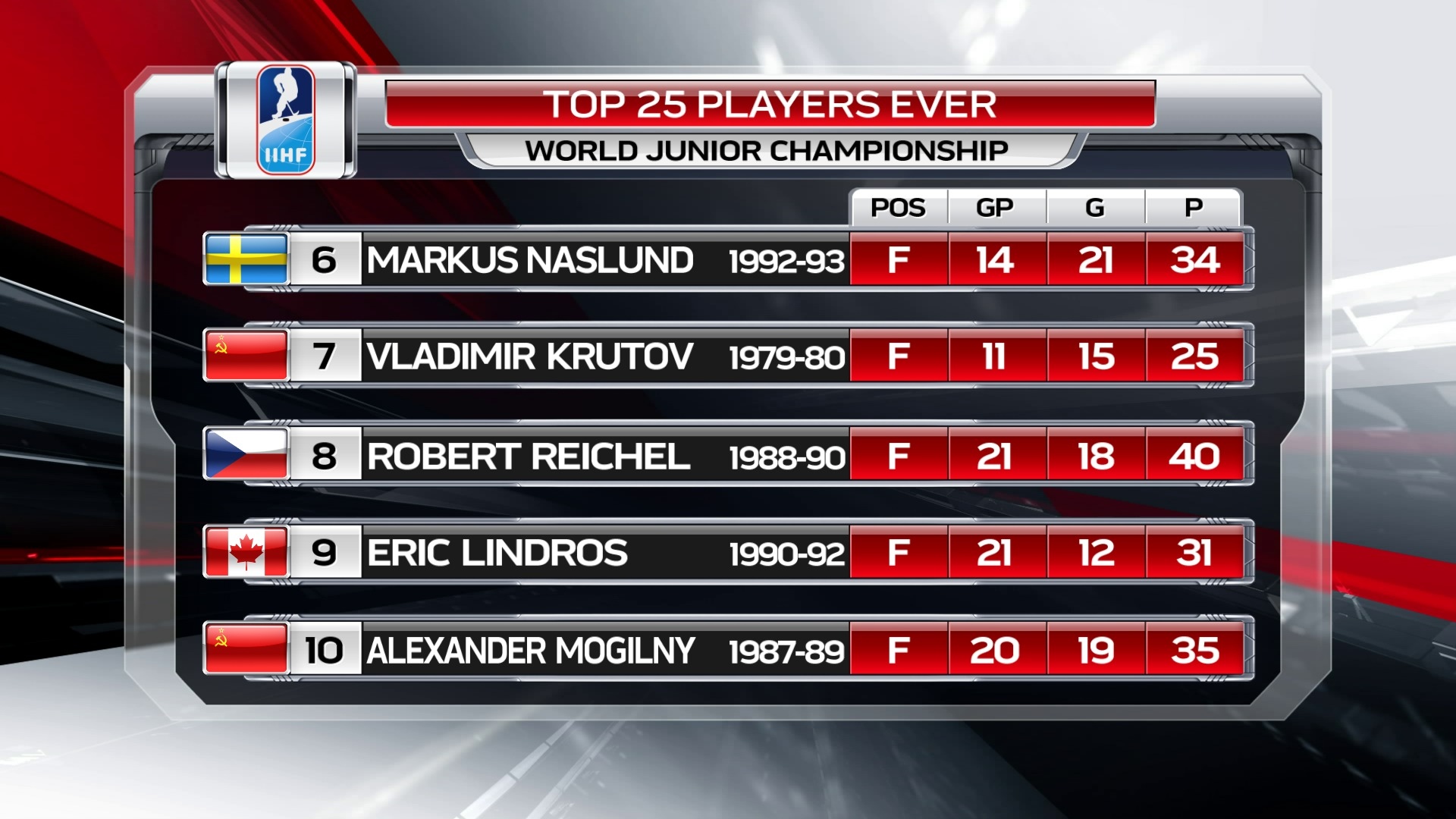 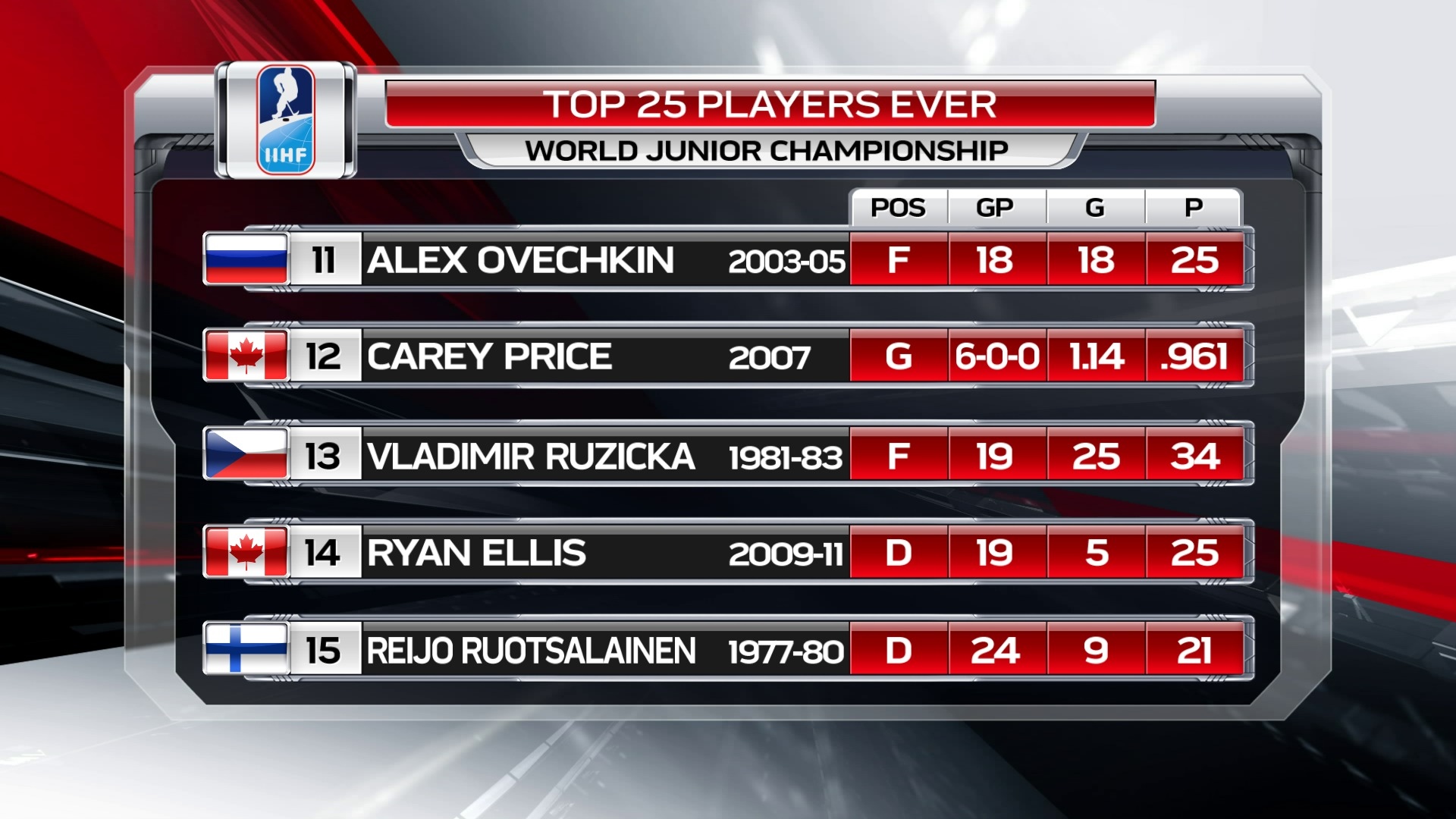 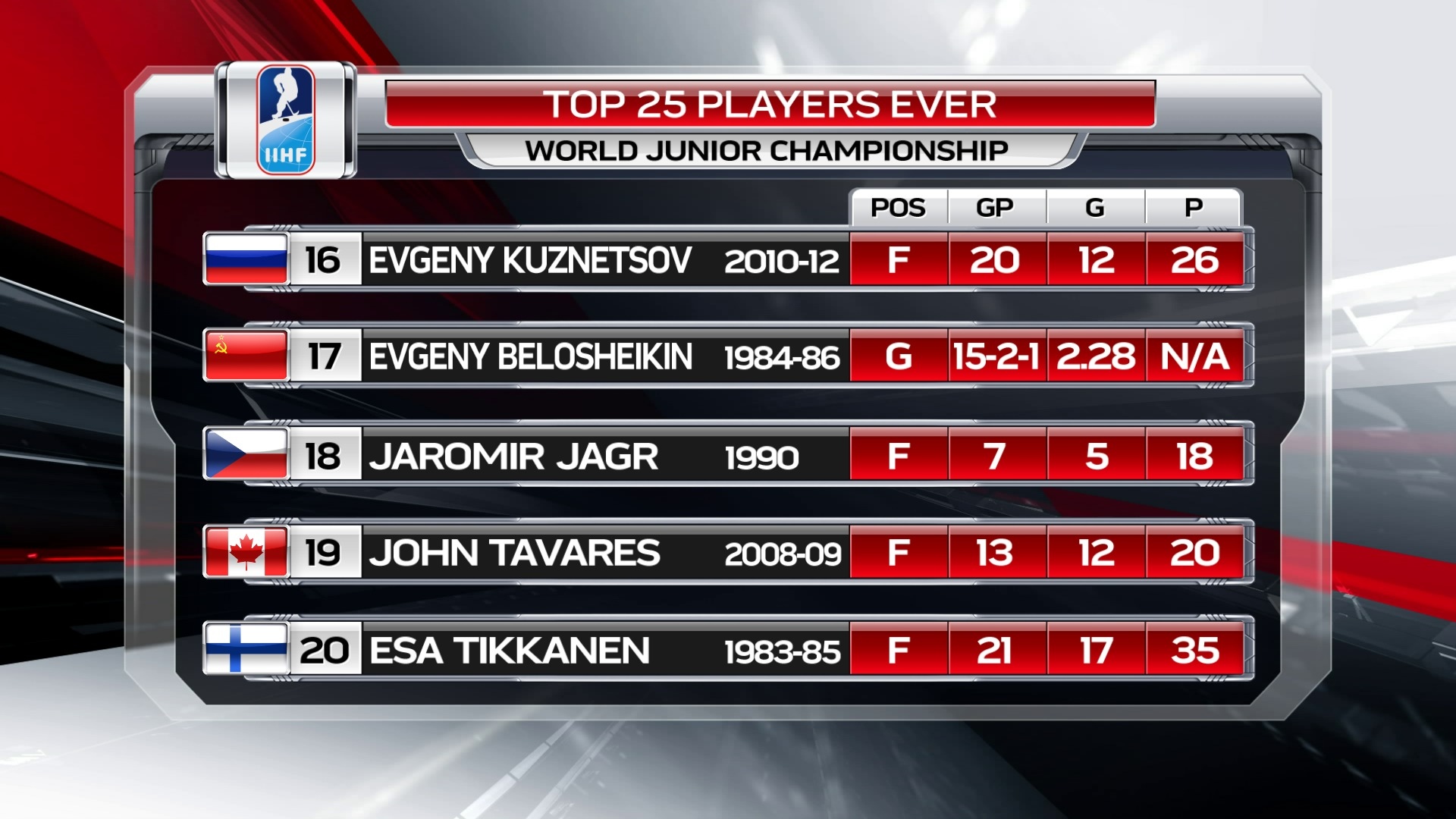 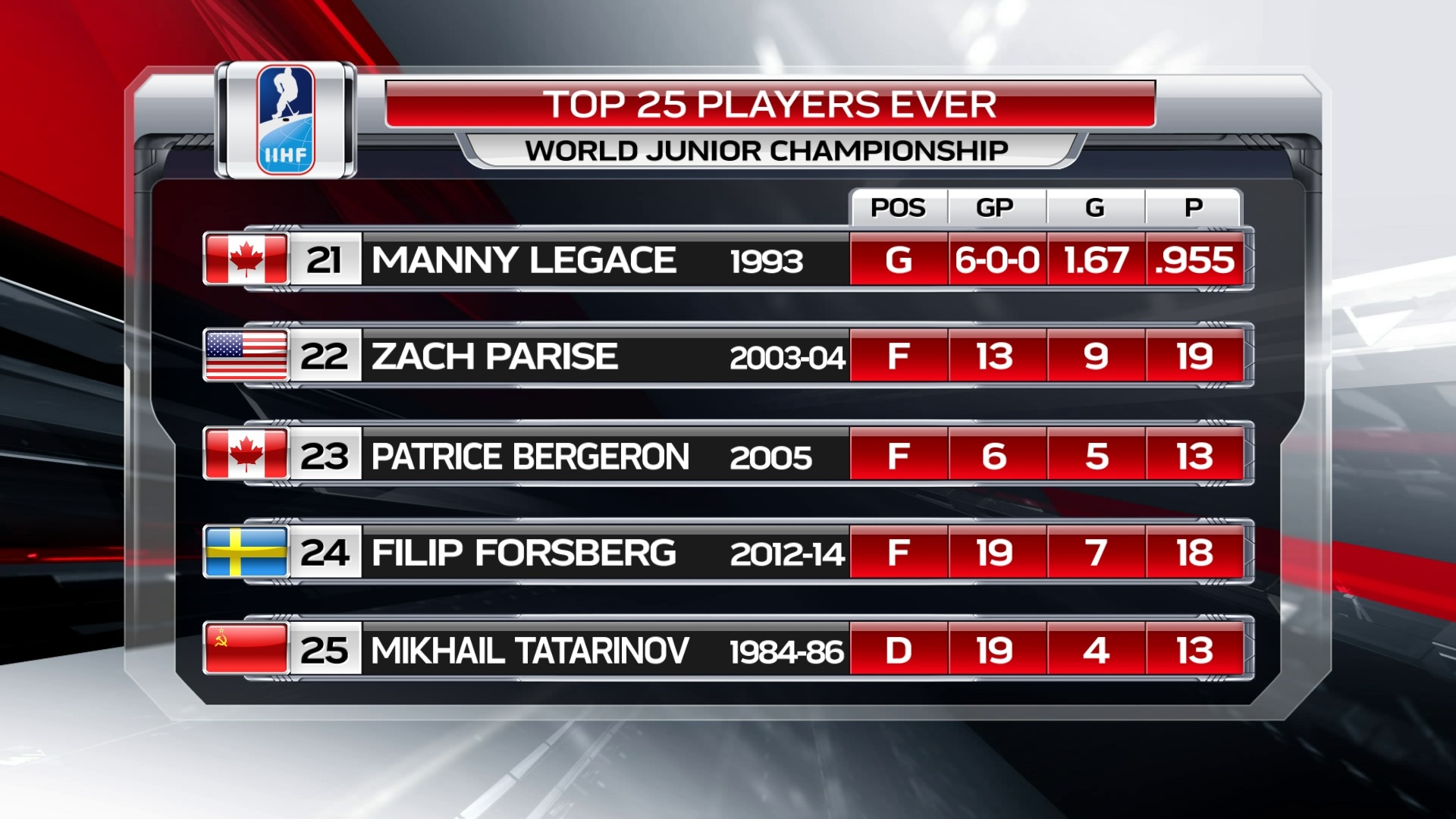