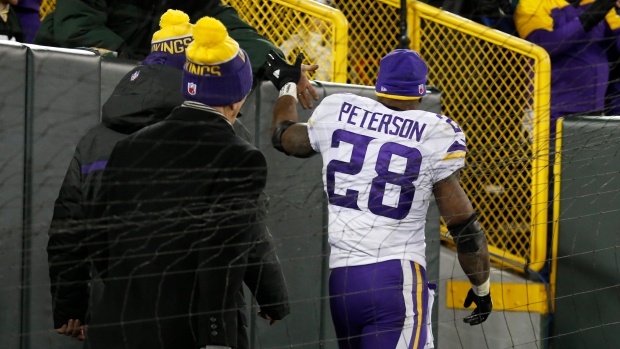 EDEN PRAIRIE, Minn. - The Minnesota Vikings head into the playoffs looking like a team on the rise, with a second-year head coach pushing the right buttons, a 23-year-old quarterback still figuring things out and a young, fast, aggressive defence that only figures to get better in the coming seasons.

For all those reasons, the optimism is high that Sunday's game against Seattle will be the first of many playoff appearances for the Vikings, the next step in their journey from rebuilding to competitor to contender.

Adrian Peterson knows better. The 30-year-old running back was 25 once, and he remembers his first trip to the playoffs in 2009 and thinking of chance after chance that would follow it. He has only played three playoff games since that first one and also watched his career careen into the ditch in 2015 when he missed 15 games while addressing child abuse charges.

So no matter what path the franchise appears to be on, no matter how much momentum seems to be building as the new core comes together, Peterson knows moments like Sunday are to be savored.

"Here we are now, 2016. Here I am 30," Peterson said after practice Thursday. "I don't know how much longer I'm going to play. You kind of look back and say, 'Wow, we really haven't had too many opportunities.' You're able to see how fast time really goes without making it to the post-season.

"So the sense of urgency is definitely there on behalf of us. That's why we've kind of been coaching the young guys to be prepared and not take it for granted."

Widely considered one of the best players of his generation, Peterson saw his image and his march up the career rushing ladder take a serious hit last season when it was revealed that he whipped his 4-year-old son with wooden switch. He sat out nearly the entire season, fought with the NFL over his punishment and the Vikings over his future with the team, and ultimately returned to Minnesota to resume his career.

Playing at an age in which most running backs start to experience a steep decline, Peterson led the NFL in yards rushing with 1,485 and scored 11 touchdowns to help the Vikings (11-5) win their first NFC North title since 2009 — the only season in which Peterson has won a playoff game.

While Bridgewater has gone through the expected ups and downs of a second-year quarterback, Peterson has been the focal point of the offence.

Zimmer wants to see his offence become more balanced and be able to consistently deliver big plays in ways other than handing the ball to Peterson.

The Seahawks held him to eight carries for 18 yards when the two teams met in Minnesota on Dec. 6. The success against the run helped Seattle blow the Vikings out 38-7, and Peterson knows the running game has to be a bigger part of the game plan on Sunday in what is expected to be frigid temperatures.

"They did a good job of forcing us out of the run," Peterson said. "We're going to have to do a great job of being balanced, making sure our run game gets going."

Peterson did not practice on Wednesday or Thursday to rest a back injury suffered in the victory in Green Bay last weekend, but he vowed to be ready to go for his first playoff game in four years.

"Just sitting back thinking about it, I didn't imagine it would take this long to be in the post-season (again)," Peterson said. "This means a lot."