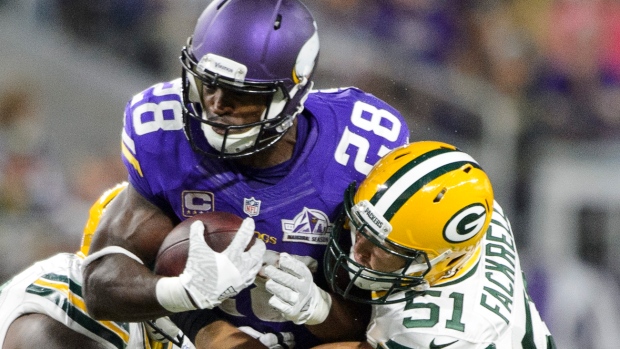 EDEN PRAIRIE, Minn. — Neither the Minnesota Vikings nor Adrian Peterson have been willing publicly to put a timetable on his potential return to the field nearly three months after he tore the meniscus in his right knee.

Peterson made two points clear, though, in his first comments to reporters since he got hurt. He is trying to get in position to return this year, but if the Vikings are eliminated from post-season contention he wouldn't come back and risk re-injury.

"For obvious reasons," Peterson said Wednesday. "I'm not really going to get into details about that, but my vision is making it to the playoffs. That's what I believe, and that's what I have my eyes on right now."

Peterson rushed 31 times for a mere 50 yards in two games before he went down Sept. 18. Without the four-time All-Pro running back, the Vikings are last in the NFL in rushing with 72.4 yards per game and 3.0 yards per attempt.

The 31-year-old Peterson, who is making $12 million this season, has one more year on his current contract. None of the $18 million he could earn in 2017, though, is guaranteed.

"I'm going to play it by ear and just keep working, and when that time comes, it will come," said Peterson, who led the league with 1,485 yards rushing and tied for the lead with 11 touchdowns in 2015. "You guys will know what's going on. We'll just wait and see."

Coach Mike Zimmer has consistently dismissed questions about Peterson's status this season. He said there are no factors beyond Peterson's health that will determine if and when he plays again.

"The guys that are out here, I'm trying to coach the best I can, and when he comes out, I'll try to coach him the best, whenever that is," Zimmer said.

Peterson has maintained a presence on the sideline, often seen encouraging a teammate after a bad play or trying to pump up one of his fellow running backs during the course of a game. Whether or not at his age coming off an injury behind a shaky offensive line he would provide a significant increase in rushing production is uncertain, but his return would unquestionably lift the spirits of a Vikings squad that has lost six of the last seven games.

Peterson, who is 11 weeks out from a surgery that carries a minimum recovery estimate of three months, famously returned from a torn ACL and MCL on his left knee suffered in the second-to-last game in 2011 to play in the opener in 2012. He said he felt back to normal about six weeks ago, though he acknowledged the stark difference in cutting and sprinting on the side when there are no defensive players trying to take him down.

While Peterson was speaking in the locker room, Zimmer was at the podium in the indoor practice facility trying to focus his comments on upcoming opponent Jacksonville rather than the star running back's rehab or the coach's own condition following surgery to repair a detached retina in his right eye.

In the latest setback in a season that has been blemished by a whole bunch of bad luck, free safety Harrison Smith could miss multiple games with a severely sprained left ankle, according to a person with knowledge of the situation speaking on condition of anonymity to The Associated Press. Smith has a Grade 3 sprain, according to the person, who was not authorized to address the injury that was aggravated last week against Dallas.

"Harrison Smith is a pretty tough guy, and he plays all the time," Zimmer said. "When he's hurt, he plays. He always plays, so I don't care about reports. I just go by what happens in practice."

Either Anthony Harris or Jayron Kearse would replace Smith in the starting lineup.

"I definitely feel like I'd be ready for the opportunity to go out there and make it better than my last start. So we're just going to take it as it comes," Kearse said. "Harrison's a great player, so it's always going to be big thing when you lose a guy like that. But us as young guys, me and Anthony Harris, whoever gets the nod, we have to go out there and perform. There can't be a drop-off."