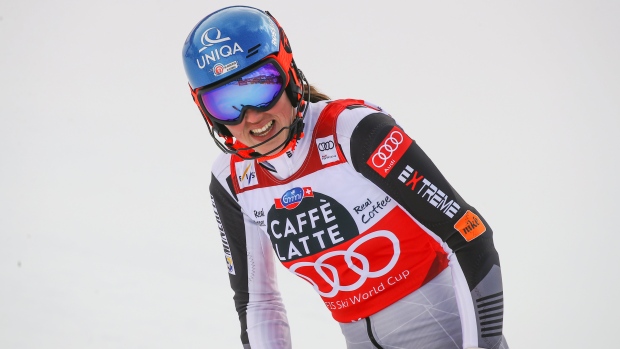 LENZERHEIDE, Switzerland — Making history for her nation, Petra Vlhova won the women’s World Cup overall title on Saturday as the first Slovakian to be crowned the best all-around skier.

Vlhova needed only a top-14 finish in her specialist slalom event, and placed a distant sixth in a race that Katharina Liensberger won by 1.24 seconds.

“I won also for my country. It means a lot” Vlhova said in an interview with Austrian broadcaster ORF. “I cannot believe it.”

The result gave the 25-year-old Vlhova an unbeatable lead of more than 100 points in the standings over Lara Gut-Behrami. The Swiss racer, who won the overall title in 2016, skips slalom but will compete against Vlhova in the season-ending giant slalom on Sunday.

A first giant crystal globe trophy for Vlhova offset letting her lead slip in the slalom standings. She dropped to third in the season-long slalom standings that she won last year.

“I'm a little disappointed how I was today because I lost the cup in slalom,” she said, though adding that the overall title had been "the main goal this season.”

Liensberger added the discipline title to the gold medal in slalom she won at the world championships last month.

Vlhova is a rarity in the increasingly specialized world of skiing by competing in all events. Saturday’s start was her 30th on the World Cup circuit this season, and she won six times.

She looked more exhausted than exhilarated after crossing the finish line. She bent forward on her skis for a few seconds before giving a weary-looking wave to the television camera.

“It's amazing. It was a really, really difficult season for me because we did almost everything. I was everywhere,” said Vlhova, who also won two silver medals at the worlds in Cortina d'Ampezzo, Italy.

Shiffrin is a three-time overall champion though chose to focus on technical events this season and did not start in super-G or downhill in the World Cup.