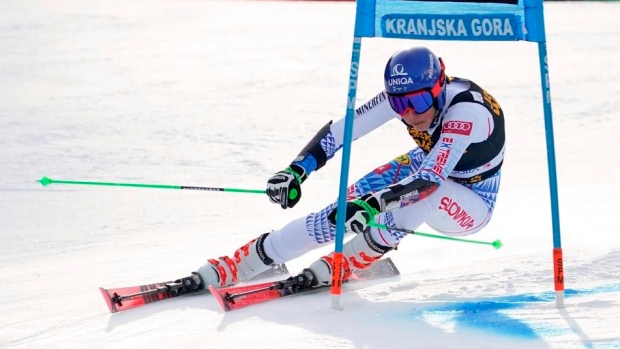 Robinson, who turned 18 in December, overtook first-run leader Petra Vlhova to win a giant slalom, almost four months after edging out Mikaela Shiffrin in the season-opener.

The Olympic GS champion from the United States was missing this time. She is taking an indefinite break from racing following the death of her father Jeff almost two weeks ago.

“At this point we have no information to share about a return to Europe or a return to competition,” U.S. team coach Magnus Andersson said on the eve of the race.

While Robinson made a costly mistake in the first leg to concede the lead to Vlhova, Robinson avoided errors in a similarly attacking final run to beat the Slovakian skier by 0.34 seconds.

The winner was praised by Vlhova, who was chasing a personal-best fifth victory of the season.

“If you are first after the first run, you want to keep your position so I am a little bit sad,” Vlhova said. “Today she was really good, Alice. She did the perfect run in the second run. Maybe it was difficult to beat her today.”

Working with Lindsey Vonn's former coach Chris Knight, Robinson is leaving her mark on the season.

She made her debut in Kranjska Gora two years ago but managed just two top-30 results.

Robinson won the junior world title in GS in February 2019 and finished runner-up to Shiffrin in the World Cup Finals the following month before beating the American skier in October.

After that victory, however, Robinson was hampered by a knee injury and initially failed to reproduce the all-attacking style that helped her eclipse the three-time overall champion in the season-opener.

Slowly getting back to form, the New Zealand teenager was fifth and sixth in two races on consecutive days in Sestriere four weeks ago.

Vlhova shared victory with Federica Brignone in the previous GS in Sestriere. The Italian skier, who was in the top five in all the previous GS events this season, placed eighth on Saturday, more than two seconds off the pace.

While Brignone remained on top of the GS standings, she closed the gap to leader Shiffrin in the overall rankings to 113 points.

Two-time former world champion Tessa Worley of France was ninth on her return from a seven-week injury layoff.

A slalom on the same hill is scheduled for Sunday. The races were moved from another Slovenian resort, Maribor, because of a lack of snow and mild temperatures.

The last time women’s World Cup races were held in Kranjska Gora in 2018, Shiffrin won both the GS and the slalom.