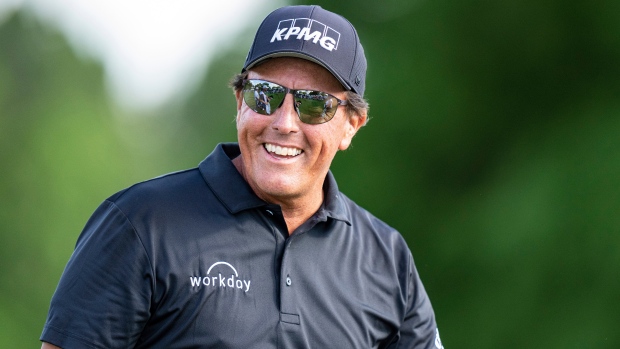 CHARLOTTE, N.C. — Phil Mickelson has gone nine months since he finished among the top 20, and it looks as though that streak is about to end at the Wells Fargo Championship.

The 50-year-old Mickelson kept his focus Thursday at Quail Hollow and blistered the course for a 7-under 64 to build a two-shot lead after the opening round. All but one of his eight birdies were inside about 5 feet.

Mickelson ran off five birdies in a six-hole stretch around the turn. He closed with two birdies and a superb par save on the par-4 ninth for his best score since a 63 in the second round of the Travelers Championship last June.

Lefty missed the cut last week in the Valspar Championship and said he was concerned about losing concentration and dropping shots during stretches of a round. That wasn't an issue at Quail Hollow, a course he loves for its mixture of birdie holes and tough par holes.

“The biggest thing for me was I was able to say in the present and focus on each shot,” Mickelson said. “My mind has been prone to wander.”

The group at 67 included former U.S. Open champion Gary Woodland, Tommy Fleetwood and Keith Mitchell, who reached 6 under until a sloppy double bogey on the long par-3 sixth hole and closed with a bogey. Still, Mitchell was 15 shots better than his previous round, an 82 on Sunday at Innisbrook.

Mickelson attributed most of the fun to his grouping of everyman Joel Dahmen (68) and old-soul Lanto Griffin, who struggled to a 75 as he tries to secure a spot in the U.S. Open.

Dahmen had tweeted that a round with Mickelson was on his bucket list and that he looked forward to see how his game would stack up against the best on the PGA Tour Champions. Mickelson has won twice on the senior circuit since turning 50 last summer.

“He's a great guy,” Dahmen said. “He's so full of ... information, would be a good way to put it. I poked him a little bit, and he played awesome. I was trying not to get my butt kicked too bad.”

Mostly, though, this was Phil looking like the old Phil.

His lone bogey came on No. 11, his second hole of the afternoon round. His longest birdie putt was 15 feet on the 341-yard 14th, reachable off the tee but tough to get it close to the back right pin. Mickelson got up-and-down from a bunker on the par-5 15th hole. From there, he barely missed with his irons.

He finished out his round with a long two-putt birdie on the par-5 seventh, and a beautiful pitch to 5 feet with the pin on an upper shelf.

Quail Hollow wasn't easy for some of the other stars.

Rory McIlroy, a two-time winners at the Wells Fargo, opened with a 72 as he tries to make it to the weekend for the first time since Bay Hill two months ago.

U.S. Open champion Bryson DeChambeau birdied two of his last three holes for a 70. DeChambeau was going along fine until a big drive found a bunker, and he sent his next shot out-of-bounds to the right, leading to double bogey.

Patrick Cantlay and Xander Schauffele each shot 72. Jon Rahm had eight bogeys in his first tournament since the Masters and shot 76.

Justin Thomas held his own with a 69 in the morning.

Corey Conners of Listowel, Ont., was the top Canadian, and the only one to shoot under par with a 2-under 69.

David Hearn of Brantford, Ont., came in with an even-par 71, Mackenzie Hughes of Dundas, Ont., Adam Hadwin and Nick Taylor, both from Abbotsford, B.C., all fired a 74, while Roger Sloan of Merritt, B.C., (76) and Michael Gligic Burlington, Ont., (77) were well back.

Mickelson said he has been doing some mental exercises, though maybe he should have just asked the tour earlier to put him with Dahmen and Griffin.

Dahmen said some of the discussions inside the ropes were different from other players.

“We got in some dopamine talk, frontal lobe and dopamine, and then the units of it, which I was actually impressed with,” Dahmen said. “Then he hit a 6-iron to 3 feet, so he must have had his dopamine correct on that one.”

Mickelson is No. 115 in the world and still not eligible for the U.S. Open. His last victory was more than two years ago at Pebble Beach. His last good opportunity to win was at the World Golf Championship in Tennessee last summer.

“There’s nothing physically holding me back from playing at a high level, but you cannot make mistakes at this level,” he said. “The guys out here are just so good, and I’ve been making a lot of errors, just simply not being mentally sharp.”