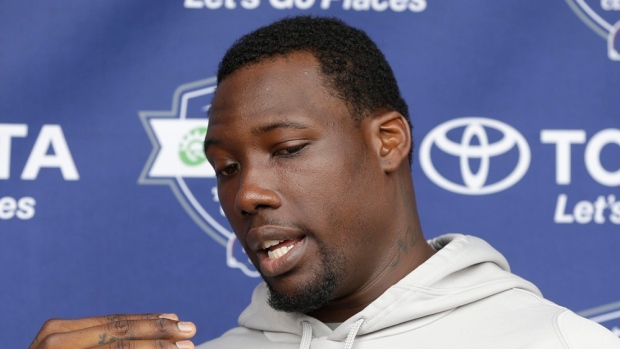 A person with knowledge of the meeting told The Associated Press on Monday about the meeting. The person spoke on condition of anonymity because the team has not confirmed Pierre-Paul's arrival.

Eugene Parker, Pierre-Paul's agent, did not return an email seeking comment on the meeting.

Coach Tom Coughlin refused to say much about Pierre-Paul after practice because he had no knowledge that the player had arrived at the team's headquarters. Teammates were expecting him.

Despite missing all of training camp, Coughlin would not rule out Pierre-Paul for the season opener in Dallas on Sunday night — provided the doctors clear him to play and he is fit.

Pierre-Paul has not practiced in the new defensive system, and team doctors will be getting their first look at his hand. Because he had not signed his contract after the team tagged him as a franchise player, he refused to let the Giants examine his hand.

Team doctors are sure to be cautious; Pierre-Paul comes with a $14.8 million salary this season. It's a price tag that might change if the player and the team work on a new contract.

The Giants can put Pierre-Paul on the non-football injury list if they don't think he is ready. He would not have to be paid until he passes their physical.

Coughlin usually is hesitant to use players who have missed training camp.

"Maybe he comes in and he's in great shape and the doctors clear him right way, he practices two days, and goes and plays," Coughlin said of Pierre-Paul. "I don't know, I'm not sure about any of that, but I'm not going to rule that out, either."

Teammates were excited about the prospect to seeing the 26-year-old Pierre-Paul again. Veteran cornerback Prince Amukamara kept players on their toes.

"Prince kept joking around, saying his name, like he was here, and everybody was looking up, trying to see if he was finally here," receiver Rueben Randle said. "We're just excited to see him and get him back."

Pierre-Paul is entering his sixth NFL season. A first-round pick in 2010, he helped the Giants win the Super Bowl the next season with 16 1/2 sacks. Last season, he had 12 1/2. He is the team's playmaker on defence.

The question many will have is can he make plays with a damaged right hand?

Fellow defensive end Robert Ayers Jr. said pass rushing is not necessarily about pushing, pulling and grabbing with a hand.

"If you watch JPP and truly study him, he's not a big grab guy," Ayers said. "You've got some guys who rush the passer and play the run that push, pull, grab guys like that. But JPP is so powerful, sometimes he just lifts guys without grabbing them. So for his game, the way he plays, and the way I study him and see the things he does, I think he'll be all right."

Ayers was more concerned whether Pierre-Paul would be able to overcome the mental block of using his right hand.

"Once he feels comfortable, I think he'll be the same JPP that we have all grown to love and see," he added.

While happy to have Pierre-Paul back, quarterback Eli Manning said the team's focus needs to be on the Cowboys. It can help JPP get ready, but when he plays will be up to the coaches.

"It's just business," Manning said. "You get a guy who's back, he's been here. He's made plays. Obviously, circumstances occur, but we welcome everybody back. Hopefully he can come back and be healthy and play some good football for us."

NOTES: Receiver Victor Cruz and defensive lineman Cullen Jenkins did not practice Monday. ... Coughlin is hopeful middle linebacker Jon Beason will be ready for the opener. He has been sidelined with a sprained knee. ... The Giants signed Craig Dahl and released fellow safety Stevie Brown.