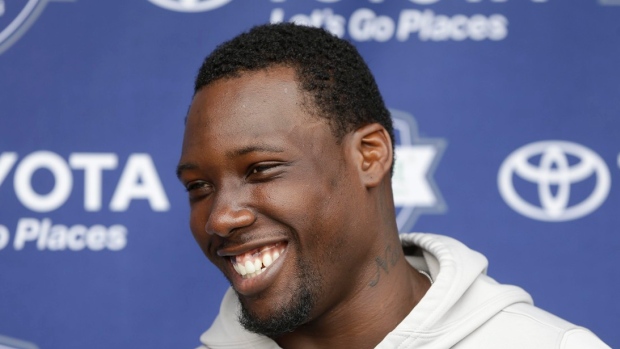 NEWARK, N.J. - Jason Pierre-Paul and the New York Giants have agreed to a one-year contract more than three months after the defensive end's right index finger was amputated following a fireworks accident in Florida.

The team announced the deal late Tuesday without providing any details.

Pierre-Paul met with the team over the past two days and was given the OK to play by team doctors. A new contract had to be negotiated because the Giants were not willing to have him sign the franchise tender that was offered before the July 4 accident.

Under that deal, Pierre-Paul would have made $871,000 per game. That was too steep of a paycheque for the Giants since they are not sure how well he will be able to perform with the injury.

The new deal is believed to be loaded with incentives.

A two-time Pro Bowler, Pierre-Paul's right index finger was amputated following the accident, and he also damaged his thumb and had burns on his hand. The six-year veteran has been working out and rehabbing in his home state of Florida.

The Giants have a two-game roster exemption on Pierre-Paul, and the team probably will not rush him since he missed training camp and the first seven games. He also hasn't played in defensive co-ordinator Steve Spagnuolo's new system.

The 26-year-old Pierre-Paul will begin working with the team's medical staff and then return to the field and begin football drills.

"We all are excited to see Jason," general manager Jerry Reese said. "He has worked very hard to get himself back into position to join the team and work toward getting on the playing field on Sundays."

Pierre-Paul said he was excited to be back.

"I'm getting ready to do what I have to do," he said. "I've been training down in South Florida with my trainer. Every day, I got up at 7:30 and lifted weights, I've been doing what I have to do to stay in football shape."

The Giants (4-3) have not generated much of a pass rush without Pierre-Paul, who led the team with 12 1/2 sacks last season. But they are in first place in the weak NFC East heading into Sunday's game at New Orleans.

Coach Tom Coughlin was upset that Pierre-Paul did not report to the team after his injury, saying he would have had access to some of the best medical care in the country.

"It is just good to have Jason back in our building," Coughlin said. "You can feel his energy and his desire to overcome what he has had to endure since July. His spirit is undeniable, and he is anxious to get to work with (defensive line coach) Robert Nunn and Spags, as well as our medical and strength and conditioning people."

Pressuring the quarterback is Pierre-Paul's specialty. In his first five seasons, he had 42 sacks, placing him eighth on the Giants' career list. That includes 16 1/2 sacks in 2011, when he helped the Giants win Super Bowl XLVI and was selected to his first Pro Bowl. He was also a Pro Bowler in 2012.

"I'm just here to help the team out," Pierre-Paul said. "I'm blessed to play the game, and I'm excited about the opportunity to play again."

Pierre-Paul had one of his finest seasons in 2014. He started all 16 games at right defensive end, and finished third on the team with 77 tackles. He also had 16 tackles for losses, 21 quarterback hits, three forced fumbles, a fumble recovery and six passes defenced.

After the season, the Giants designated him as their franchise player. He had not signed his one-year tender offer when he was injured, and was without a contract.