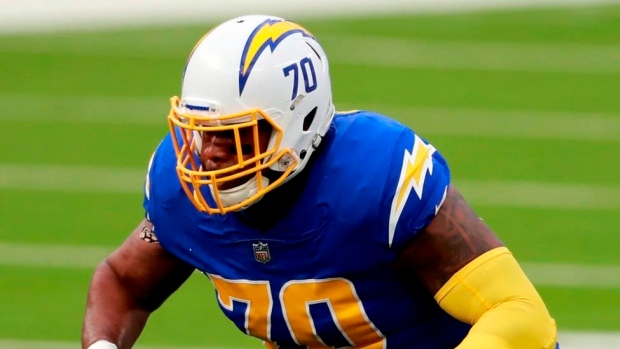 PITTSBURGH (AP) — It didn't take long for the Pittsburgh Steelers to find a replacement for David DeCastro.

The Steelers signed five-time Pro Bowl guard Trai Turner to a one-year deal on Friday, a day after cutting DeCastro in a somewhat surprising move.

Financial terms were not disclosed, but Pittsburgh did find itself with a little money to spend after releasing DeCastro, a six-time Pro Bowler and two-time All-Pro who served as the linchpin of a line that was among the league's best for the second half of the 2010s.

Turner comes to Pittsburgh three months after getting cut by the Los Angeles Chargers. The 28-year-old Turner spent just one season in Los Angeles, playing in a career-low nine games.

Pittsburgh is hoping Turner can return to the form he showcased during a six-year stint with the Carolina Panthers, when he became a Pro Bowl fixture after the Panthers selected him in the third round of the 2014 draft. Turner made the Pro Bowl every year from 2015-19 before being traded to Los Angeles in 2020 for Russell Okung.

Turner will get a chance to compete for the starting right guard spot created by DeCastro's departure. He will be part of a new-look offensive line for the Steelers following the retirement of center Maurkice Pouncey, DeCastro's release and the departure of Alejandro Villanueva and Matt Feiler in free agency.