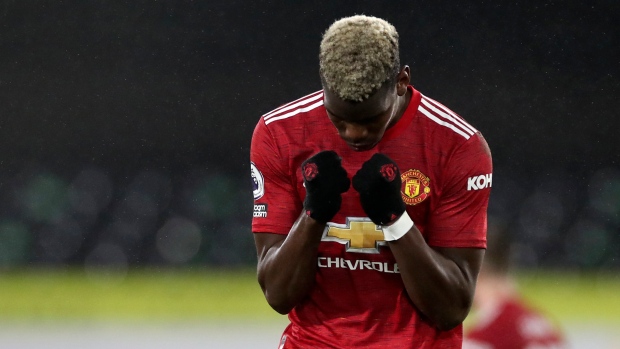 It wasn't long after Paul Pogba chased back 40 metres to regain possession and thwart a dangerous-looking counterattack that the Manchester United midfielder collected the ball just outside the penalty area, with three Fulham players near him.

Pogba twisted and turned, manoeuvring himself into a pocket of space before unleashing a powerful left-foot shot that curled into the far corner and secured another win for United.

No one has ever doubted the France international's talent. But he is showing an appetite for the battle that many United fans have longed to see since his return to the club for a second spell in 2016, and it's keeping the team in front in the Premier League title race.

Pogba's long-range goal clinched a 2-1 victory over Fulham on Wednesday, which moved United back into first place at the halfway stage of the season — two points above Manchester City, which beat Aston Villa 2-0.

Seeking a first league title since 2013, United had jumped to the summit for the first time this season a week ago — and that was thanks to Pogba's edge-of-the-area volley in a 1-0 win at Burnley.

United manager Ole Gunnar Solskjaer is managing to coax a string of impressive displays out of the club's record signing, just a month after the midfielder’s future looked uncertain after his agent, Mino Raiola, told an Italian newspaper that it was “over” for Pogba at United.

Pogba might just be in the best form of his turbulent United career.

“I would say the best of the team, it is not only about me," Pogba said. "Playing on the left or the right, as long as I play, I know I have the confidence of the guys. When I am on the pitch I just want to win, and I will do my best to win.”

Solskjaer said Pogba is a player who “can do everything.”

“He can play wide, play in midfield, create chances and shoot," the United manager said after Pogba's latest all-action display. “Today we felt his position was midfield and what a goal with his left foot. He was so committed, and got tackles in as well.”

United tied its club record of 17 Premier League away games without defeat — set by the treble-winning side of 1999 — but only after rallying from 1-0 down at Craven Cottage after Ademola Lookman's sixth-minute goal.

Edinson Cavani equalized for United in the 21st, bundling the ball home from close range after Fulham goalkeeper Alphonse Areola spilled a cross.

City's win wasn't straightforward on Wednesday, either, and it needed a contentious goal to put Pep Guardiola's team ahead in the 79th minute — just when Villa looked like it would be earning a hard-fought point.

City midfielder Rodri was returning from an offside position when he dispossessed Villa defender Tyrone Mings before releasing Bernardo Silva, who cut inside and smashed home a shot from the edge of the area. The goal was allowed to stand, however, because the officials deemed a new phase of play had started when Mings controlled the ball on his chest before being picked off by Rodri.

It sparked howls of protests from Villa's players, and Villa manager Dean Smith was sent off for complaining about the awarding of a goal he described as “farcical” and “pathetic.”

“I said to the fourth official, David Coote, ‘Did you get juggling balls for Christmas?’” Smith said, explaining when he was shown a red card by referee Jonathan Moss. “I don’t think any other manager would get sent off for that.”

Mings tweeted that the decision of the officials was “nonsense.”

“Never even heard of that rule,” he wrote, “just let players stand offside, then run back & tackle you? In hindsight I should’ve cleared it, 100%, but didn’t even know that was the case.”

Ilkay Gundogan wrapped up City's sixth straight league win in the 90th minute by converting a penalty after Matty Cash raised his hand to block a goal-bound header from Gabriel Jesus.

Kevin De Bruyne hobbled off for City in the 59th minute with what Guardiola described as a muscle injury in his leg.

It was Villa’s first league match since Jan. 1, after which there was a coronavirus outbreak in the squad that led to the training ground being closed.