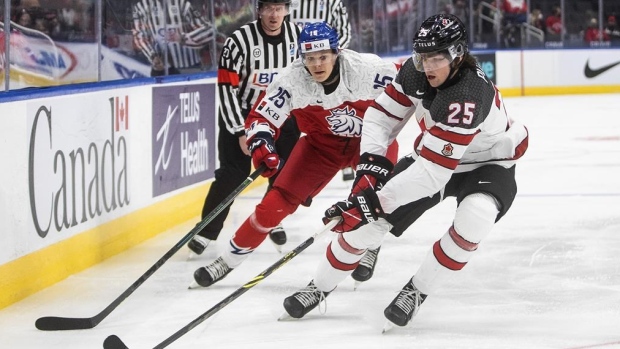 Even moments before a game, Owen Power is calm, cool and collected.

"He's the same exact way he'd be on an off day," forward Cole Perfetti said. "It's kind of weird but, hey, it works for him. He's obviously figured it out...Sometimes it's hard to believe. He's kind of just the same way no matter what happens, kind of just relaxed and chill like he's just hanging out."

That persona carries over to the ice.

"Nothing really fazes him," Perfetti continued. "He just keeps going and you can see that with his poise on the ice. Guys will be coming at him and he doesn't seem to get too scared with puck and will kind of hold onto it and make the right play."

Power's right plays added up to a three-goal performance in Sunday's 6-3 win against Czechia. It was the first-ever hat trick by a Canadian defenceman in the tournament's history.

"It's pretty special," the Mississauga, Ont. native said. "It's the first hat trick I've ever had so doing it at this stage and wearing the Team Canada jersey is pretty special."

The performance by the first overall pick in July's National Hockey League draft had the hockey world – not just Buffalo Sabres fans – buzzing.

"It was pretty sweet," said Anaheim Ducks defenceman Jamie Drysdale, who watched the game with his dad and brother in California. "I almost thought he was going to get a few more, to be honest, when he was doing that. He just doesn't have a panic button. He's real good on the break out, in-zone offensively and I even noticed he was down by the goal line a few times so he's a big guy, who can do it all."

And he can do it all under pressure. The Michigan sophomore has already won a gold medal at the men's World Championship where he logged big minutes down the stretch. In a recent conversation with TSN, Arizona Coyotes head coach Andre Tourigny, who was on Canada's staff in Latvia, marvelled at how the teenager was able to come in cold and still perform well.

"He did not play a lot early," Tourigny recalled. "In the second or third game, he got his first shift halfway through the second period and, right away, he went on the ice and was very assertive and got a scoring chance. He was skating with the puck, jumping into the offence like if he was playing every second shift."

Power has that X factor.

"It's his ability to play the high-performance game with a calmness, I'm not sure you can teach that," observed Team Canada head coach Dave Cameron. "He's able to keep that even keel. He's done it at the Worlds. He's done it at Michigan. He's started here at the World Juniors and we expect him to continue."

"That taught him how to roll off checks," Cameron noted. "Basically, how to not panic when you're under pressure and that transfers over to hockey in terms of protecting the puck and knowing other teams are going to pressure you and how you escape from that."

At 6-foot-5, 214 pounds, Power is a big presence on the ice. Some see him as the second coming of Chris Pronger, but another name springs to mind for Cameron.

"Pronger had that mean streak about him," Cameron pointed out. "I don't see Owen getting to that level. But I coached against and had [Alex] Pietrangelo on the World Junior teams and I see a lot of similarities there with that ability to escape under pressure."

It's been a relatively quiet start to the World Juniors for Shane Wright, at least by his lofty standards. The Kingston Frontenacs centre recorded one point, a secondary assist on the power play, in Canada's lone pre-tournament game. Wright was then held off the scoresheet in Sunday's opener against Czechia recording just one shot on net.

"Maybe some jitters off the start," Wright said. "A little nervous. Maybe a little too amped up. Obviously, I was pretty excited with all the fans in the stands and finally getting to play. I feel like I settled into the game pretty well. I feel like, overall, I played alright and hopefully I can pick my game up."

On Monday, Wright shifted to right wing at practice. Shawinigan's Mavrik Bourque moved to the middle on that line between Perfetti and Wright.

"Not too much of an adjustment," said Wright. "As a centre, I'm used to being low, low in the corners with the D, but as a winger I'm staying high in the slot and protecting the middle of the ice there. Maybe a little less responsibility in my own end and I can pick up a few more chances in the O-zone, but nothing too different. Not too bothered with playing wing or playing centre."

After taking a big hit from Stanislav Svozil in the third period on Sunday, Team Canada forward Xavier Bourgault left the game and did not return. The Edmonton Oilers prospect missed Monday's practice.

"No official update other than he wasn't able to practise today," said Cameron.

Justin Sourdif, who has skated exclusively on a line with Ridly Greig and Jake Neighbours since training camp opened, was slotted in as the 13th forward during Monday's workout. The feisty Vancouver Giants captain may be facing supplemental discipline for a late and high hit on Jiri Tichacek.

Kamloops Blazers sparkplug Logan Stankoven, who was a healthy scratch in the opener, skated alongside Mason McTavish and Kent Johnson. Stankoven also skated on a line with McTavish in the first three practices of training camp before dropping down the lineup.

Connor Bedard, who had moved up to skate alongside Wright and Perfetti midway through Sunday's game, was on the fourth line at practice.

Dylan Garand, who started Team Canada's opening game, signed a contract with the New York Rangers last week. Sebastian Cossa, who played in the pre-tournament game against Russia, was picked 15th overall by the Detroit Red Wings in July and has already signed an entry-level deal.

Brett Brochu, meanwhile, has been passed over in the last two NHL drafts.

"It's definitely tough seeing two years go by without seeing my name picked," the 5-foot-11 native of Tilbury, Ont. said. "I just used it as motivation to stay focused on the task at hand. Got a third [chance] at it this year."

Brochu will get the start for Team Canada on Tuesday against Austria. It will be his first ever game with the national team.

"I'm really excited," the London Knights goalie said. "Ever since I was a kid, I've dreamt of that moment."

"Having a great OHL career, it's hard to believe he hasn't been drafted," said Perfetti, an OHL alumnus. "With his work ethic and the kind of guy he is, teams will want that kind of person."

Brochu, who was playing Jr. C hockey with the Dresden Jr. Kings just three years ago, has certainly earned this opportunity to impress NHL scouts on the big stage. He's 16-5-1 with a .921 save percentage this season.

With no OHL season last year, Brochu found himself skating with the Wilkes-Barre/Scranton Penguins in the American Hockey League where he got into one game on an amateur tryout.

"My time in the AHL was really beneficial," he said. "Working with [Pittsburgh Penguins goalie coach] Andy Chiodo, [we] just grew my game on and off the ice."

Cameron gave Garand a vote of confidence after the Kamloops keeper allowed three goals on 17 shots on Sunday.

"He started strong," Cameron said, "rebounded well. I liked it."

So, why start Brochu on Tuesday?

Cossa, who allowed three goals on 11 shots in his 30 minute exhibition outing last Thursday, appears to now be No. 3 on the depth chart.

Donovan Sebrango had gone 62 straight games without a goal prior to Sunday. The drought stretched across two leagues and three seasons. But the World Juniors can bring about some magical moments and on Boxing Day the Grand Rapids defenceman scored his first goal since Feb. 11, 2020 when he played for the Kitchener Rangers.

His mom, Kim Sebrango, was watching from the stands.

"I could see him creeping in and I thought, 'Oh my God, he's going to do [it],'" Kim said. "I just couldn't believe it. Honestly, I'm going to cry right now. I think I just stopped crying."

Before the tournament started, Donovan said he was determined to win the gold medal for his mom, who raised him as a single parent and in 2017 sustained a serious injury in a car crash.

An amazing win for Canada and such an honour to be here! Atta’ boy Donovan! https://t.co/wnjuLgxgmA

A third-round pick by the Detroit Red Wings in the 2020 draft, Sebrango has played 51 AHL games over the last two seasons picking up seven assists. Among the final cuts by Hockey Canada last year, Sebrango earned his way onto the World Junior squad this year.

"Donovan's always been pretty determined," Kim said. "I called it stubborn. We'll say it's determination now and it's served him well. He's been a hard worker since Day 1. He was always the kid who was at the rink two or three hours early because he had to tape his sticks. He was pretty focused from an early age. He's had a lot of help along the way and I just can't believe we're here."

Even before scoring on Sunday, Donovan had delivered a special experience for his mom.

"I can't even explain it," Kim said. "Trish Power came up to me and was like, 'Oh, I want to introduce myself,' and I'm like, 'Holy cow!' I'm in awe of her. And then I see her son play. And the Perfettis. I just can't believe. I can't believe I'm here. We started out in a small town in Gananoque, population 5,200, so to be here is something special."

Cameron was Canada's head coach at the 2011 World Juniors when the team squandered a 3-0 lead in the third period en route to a shocking 5-3 loss against Russia in the gold-medal game. Cameron called timeout after Russia tied that game 3-3, but it was already too late.

On Sunday, Cameron called a timeout after Czechia scored three quick goals to grab a 3-1 lead in the first period. The coach insists he wasn't having any flashbacks.

"I can't remember last week let alone 10 years ago so, no," the Ottawa 67s bench boss said. "I just thought it was the proper time. Between that tournament in Buffalo and the 10 years since I've called lots of timeouts. It's a feel."

The message during Sunday's timeout?

"Just play hockey," Cameron said. "Protect the puck. Make good decisions with the puck. Don't try to play the whole tournament in the first 10 minutes of the first game."

Cameron wasn't surprised that his group fell behind.

"This is my fourth World Juniors and the thing I've learned is: expect the unexpected," he said. "You put in a style of play for your team, but it never goes the way you draw it up so it's about your team's ability to be able to adapt when it's not going your way...One of things we discussed all week as a coaching staff was that we didn't know what the hell to expect the first 10 minutes. It's two teams that hadn't played much. We played one game. They didn't play any. We knew it was going to be a bit of an adventure. It was junior hockey at its finest."

Power scored 23 seconds after the timeout and Canada didn't look back from there.

"That timeout was huge," Power said. "It kind of settled us down and we did a better job of keeping guys in front of us and not trying to force anything or cheat for any offence. After that timeout we settled in and played good hockey."