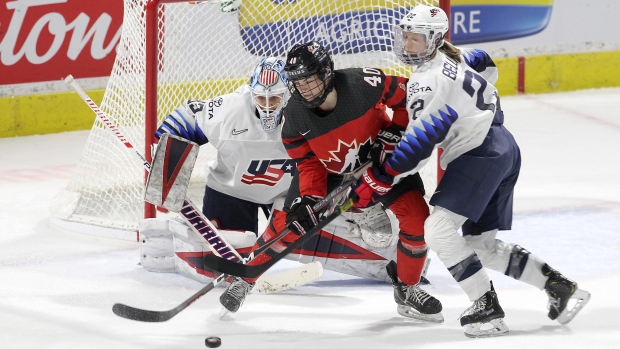 It took a while, but on Tuesday Canada’s women’s hockey team took to the ice, together, for the first time since the 2021 IIHF Women’s World Championship in Halifax and Truro, N.S., was cancelled in April because of COVID-19.

Twenty-nine players suited up at Canada Olympic Park in Calgary, the first on-ice session in a two-week development camp ahead of the rescheduled 31-game tournament which will take place from Aug. 20-31. All games will be played at WinSport Arena, with all of Team Canada’s games broadcast live on TSN.

The session on Tuesday was equal parts celebration and hard work.

“I’m sure there were a ton of smiles on our faces throughout practice, but we sure managed to get a lot of good work in there,” she said.

“So it was great to be on the ice together as a full team.”

“We’ve been on the ice the past couple of days but just in small groups, so to have the full team out there was pretty fun. There was lots of energy on the ice.”

After the cancellation of the Women’s Worlds by the province of Nova Scotia in April, Turnbull and Jenner were the most vocal Canadian players, both critical of what they felt was a lack of a contingency plan from tournament organizers. The event was supposed to begin May 6 after the 2020 tournament was cancelled due to the ongoing coronavirus pandemic.

“It was definitely a disappointing week for all of us when we heard that news,” Jenner said.

“It was a bit of an emotional rollercoaster for sure. But as soon as we knew that Hockey Canada was going to make that happen (rescheduled tournament), we were pretty confident in having it here in Calgary that the event is going to be very safe and very well run. As soon as we got word that it was going to go ahead, right away we refocused.”

The goal was always to have a tournament, one way or another.

Canada won a bronze medal at the 2019 tournament after shutting out Russia 7-0 but hasn’t captured gold since the 2012 Women’s Worlds.

“All we wanted was a world championship to play in,” Turnbull said.

“Despite the timing not being ideal – obviously, having a world championship to kick off hockey season is a little bit different than what we would typically expect – but nonetheless, we’re excited to play. Our sport has been through the ringer over the past two seasons, so at this point we’re just really happy to have the opportunity to play some games.”

Behind the bench, Canada is now led by Troy Ryan. Given the pandemic’s impact on women’s hockey, this is Ryan’s first major tournament at the helm.

“It’s great,” Ryan said. “It’s exciting. It has been a long journey for this group, as much as it has been for the entire country. I’m just excited now.

“Although it’s relatively new, I’ve been with this program for a few years. I’m just excited to put into the games all the things we’ve been doing during the pandemic.

“All that time spent together is going to be valuable,” said Ryan, who was hired as Canada’s head coach in January 2020.

Turnbull and Jenner both feel Ryan was the right choice to lead the program heading forward as he has been a member of the team’s coaching staff since 2016.

“Yeah he might be new in the head coaching role, but he’s been around the program for a long time. All the players know Troy very well. He’s extremely personable. He’s extremely trustworthy, and I think those two qualities are what will make him a great coach.”

Jenner emphasized the culture Ryan is building early on in his new role and how he’s empowered his players.

“He’s done an excellent job in setting the standards so far in camp and giving us the ability as players to create the environment we want to create,” she said.