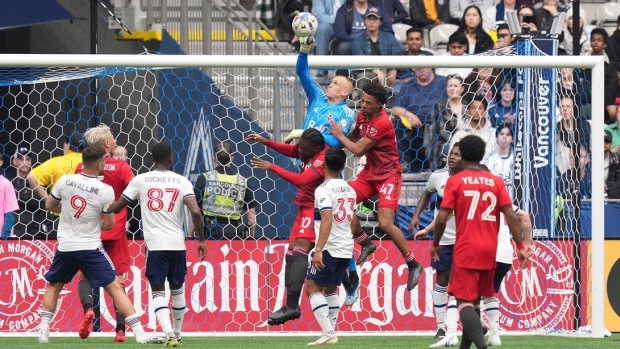 TORONTO — The Professional Referee Organization has acknowledged that officials erred in disallowing a goal by Jayden Nelson in Toronto FC's 1-0 weekend loss at the Vancouver Whitecaps.

"The evaluation of that incident is that it was an incorrect decision to disallow the goal. There was no offence," Howard Webb, general manager of PRO, told The Canadian Press on Thursday. "And also that the VAR (video assistant referee) should have stepped in to recommend a video review so the referee could then have a look at the screen and hopefully change the decision."

Nelson scored to put Toronto ahead in the 66th minute Sunday at B.C. Place Stadium but referee Victor Rivas waved off the goal, ruling that goalkeeper Thomas Hasal had control of the ball and was fouled when Nelson poked it into the net. Video assistant referee Malik Badawi and his assistant, Jonathan Johnson, did not intervene.

The play started with Deandre Kerr driving a low cross across goal from the byline. A diving Hasal got a hand to it but the ball went straight to Toronto's Alejandro Pozuelo, who fired it back at goal. Hasal acrobatically got his body in front of the ball but — seemingly — couldn't hang on to it, allowing Nelson to sweep it and knock it home.

To most, including everyone in TFC colours, Nelson got his boot to the ball before Hasal got his hand to it.

The goal didn't count and former TFC forward Tosaint Ricketts scored in the 90th minute to give Vancouver the win. Adding to the drama, Hasal was injured on the disputed goal and gave way to Cody Cropper in the 70th minute.

"The VAR checked the footage … and saw that it was really close," he added. "There was some blurring of the images from when Jayden Nelson came through"

VAR concluded "there wasn't sufficient evidence to say that the on-field decision was clearly and obviously wrong," said Webb, a former FIFA referee whose 25-year officiating career featured more than 500 combined matches in the English Premier League and Football League. "We formed a different view. We think there is enough evidence in our opinion and that should have been the outcome."

Webb said he "acknowledged the error privately" in a discussion with TFC officials earlier in the week but PRO didn't acknowledge it formally until later after formal evaluation of officials had been wrapped up.

"Nothing changes the result. We move on," said Toronto president Bill Manning.

"And obviously when you have VAR, that's on the VAR to see it," he added. "It's clear, everybody that's seen it realizes that Hasal never had control."

On Wednesday, Bradley said Rivas was not in a good position to see the play.

"It was a mistake, one, because the referee disallowed the goal. But then it's a bigger mistake because the system didn't work."

The Whitecaps said Hasal sustained a left middle finger injury and was due to see a specialist. He remains out.

This report by The Canadian Press was first published May 12, 2022