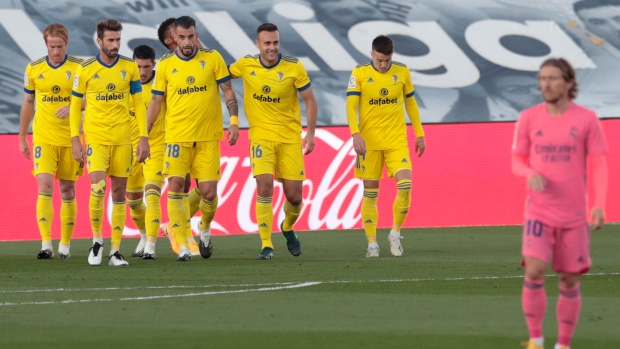 MADRID — Promoted Cádiz stunned Real Madrid 1-0 to win a Spanish league match at the defending champions for the first-ever time on Saturday.

Led by veteran striker Álvaro Negredo, Cádiz proved more dangerous than Madrid, particularly in the first half when the visitors could have gone into the interval with a two-goal advantage.

Negredo set up Anthony Lozano to chip the game’s only goal over Thibaut Courtois in the 16th minute.

Karim Benzema had Madrid’s only good chance to equalize when he hit the crossbar with eight minutes remaining.

Madrid defender Sergio Ramos had a knock to the left knee during a clash with Lozano that forced him to be substituted at halftime, casting doubt on his availability for Madrid’s Champions League opener against Shaktar Donetsk on Wednesday. Ramos watched the second half with an ice pack on his left knee in the stands of Madrid’s training stadium, empty of fans like all league games since March.

Madrid was undefeated for 15 league matches going back to last season. It had won three and drawn one this season.

Cádiz moved level with Madrid and Granada at the top of the table with 10 points.

The slip by Madrid comes a week before Zinedine Zidane’s team visits Barcelona in the first “clásico” match of the season.

“We played a very bad first half,” Courtois said. “They beat us to balls, they beat us in every facet… A loss always can serve as a wake-up call so you see what you are not doing well. Now we need to play well against Shaktar so we can arrive in good shape at Camp Nou.”

The 35-year-old Negredo played for Sevilla, Manchester City, Valencia and other clubs before returning to Spain as Cádiz’s star signing this summer after it had earned its first promotion to the top flight in 15 years. Negredo had played the previous two seasons in the United Arab Emirates.

Slower and not the same scoring threat he once was, Negredo showed he could still spear an attack with his passing and leadership.

Negredo almost grabbed a goal moments after kickoff when Cádiz intercepted a poor Madrid pass. Negredo's shot was goal-bound until Ramos rushed back and cleared it from the line.

Negredo then caught Ramos out of position when he headed a ball behind the defender into space for Lozano to dink it over Courtois.

Madrid still failed to create serious trouble for the visitors.

It was Cádiz’s first league victory at Madrid after losing 11 and drawing 1 of its previous visits.

Cádiz is playing in the first division for the first time in 15 years. Coach Álvaro Cervera’s well-disciplined squad has won all three of its away games this season.

Lozano was also substituted at halftime, shaken up in the run-in with Ramos, but he said that it was only a knock.

“This is something unimaginable for us,” Lozano said. “We are a team that has been playing together for some time and we know how to buckle down and then make the most of our chances, so we feel we can compete with bigger teams. We take away a great prize. It is a historic win.”

Madrid wore pink jerseys in place of the traditional white to show the club's support for International Day Against Breast Cancer on Oct. 19.