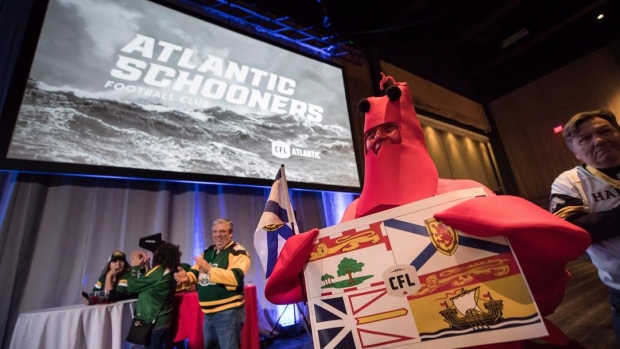 HALIFAX — A report prepared for Halifax Regional Council recommends the rejection of a proposed CFL stadium in the city's Shannon Park neighbourhood, but also says a one-time payment of $20-million could be made for a facility elsewhere.

The document prepared by Chief Administrative Officer Jacques Dube says the current proposed site, on land formerly used for military housing near the city's MacKay Bridge, is "not conducive to a robust transportation plan."

"The CAO and his team do not recommend that regional council provide a one-time contribution for a stadium at that site," the report states.

Dube's report says the site is severely encumbered by a CN rail line, and the bridge would require an extensive public infrastructure investment. It says the municipality would likely need to invest in a new ferry terminal nearby and three new ferries, adding tens of millions of dollars in additional costs.

"Additional work is needed to resolve these concerns and doing so in the absence of a comprehensive development plan and developer for the site is very difficult to conceive," the report says.

Schooner Sports and Entertainment (SSE) is proposing a 24,000 seat stadium for the Shannon Park site at an estimated cost of $110-million.

The report says while such a stadium would add valuable infrastructure to the city, the financial options proposed by SSE would require a considerable amount of public funds that are dependent upon the success of an "untested Halifax CFL franchise and Halifax market."

SSE has asked for $41-million to $79-million, according to the report.

It says the business group's proposal assumes it will sell 21,600 tickets for each of 10 scheduled CFL games, or 96 per cent of stadium capacity.

"In comparison to attendance levels to other CFL teams in Canada, the CAO and his staff team believes that these attendance figures are aggressive," the report says.

In order to break even, Dube said, SSE would have to hit the 70 per cent mark in sales per game.

"The options proposed present considerable risk to the municipal taxpayer."

"As such, the CAO is recommending a one-time payment of $20-million upon substantial completion of the stadium."

Staff recommends the city take no ownership in the stadium, make no loan guarantee and not cover ongoing capital or maintenance costs.

"We appreciate the due diligence (HRM) staff have exercised in this process and support the considerations raised regarding site selection for this important community project," LeBlanc said. "We look forward to receiving council's decision on whether to approve this recommendation and we stand ready to work diligently with staff and the community to ensure the success of this game-changing community development."

SSE's proposal was updated last month after it was nearly quashed by regional council in October.

The revised proposal would see it contribute tens of millions of dollars towards stadium construction, fund all ongoing capital expenses, and be responsible for all operational expenses regardless of who owns the stadium.

Regional council is to meet Tuesday to discuss the staff report, which was posted online as part of council's upcoming agenda.