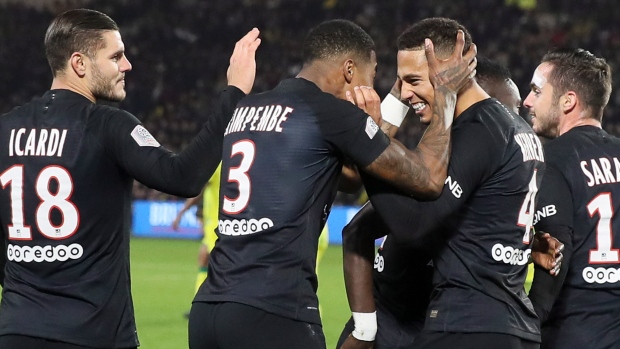 Icardi tried to jump out of the way of countryman Ángel Di María's shot in the 29th minute but instead diverted into the net. It was his 10th league goal of the season but first since Dec. 21 for the prolific Argentine striker. Di Maria then set up defender Thilo Kehrer for a header from a corner in the 56th for 2-0.

But Moses Simon pulled a goal back in the 68th and PSG's shaky defence needed sharp saves from goalkeeper Keylor Navas to deny Simon and Renaud Emond in the closing stages.

Nantes was without goalkeeper Alban Lafont due to a minor injury, and his understudy Denis Petric made a superb stop from Icardi's early volley.

France striker Kylian Mbappé, who angrily snubbed PSG coach Thomas Tuchel after being substituted in Saturday's 5-0 home win against Montpellier, set up the first goal in the 29th.

He burst down the left and a drove a low pass to Di Maria, whose effort from near the penalty spot clipped Icardi as he tried to pirouette out of the way.

Poor judgement by PSG centre half Presnel Kimpembe let Nantes back in the game midway through the second half.

Gathering a pass inside his own half he tried back-heeling the ball to Kehrer but flicked it into the path of Simon, who sprinted clear and finished confidently past Navas.

The impressive Simon teed up Emond in the 80th, but he scooped his shot over.

Marseille is at Saint-Etienne on Wednesday.

PSG star Neymar was left out after picking up a rib injury against Montpellier.

It did not prevent him hosting a lavish birthday party on Sunday, which met with the disapproval of Tuchel and reportedly also from the club's hierarchy.

Still, Neymar's bash was allowed to go ahead for the third straight year, despite it again being so close to a domestic game and an upcoming Champions League encounter.

PSG travels to play free-scoring Borussia Dortmund in the first leg of their last-16 game on Feb. 18, having failed to reach the quarterfinals in the past three seasons.

Lille maintained its chances of qualifying for next season's Champions League with a 1-0 home win against third-place Rennes.

Veteran forward Loïc Rémy continued his recent form with the only goal after four minutes, helping fourth-place Lille close the gap on Rennes to three points.

The team finishing third gets a place in the Champions League qualifying rounds.

Mid-table Monaco has been leaking goals but hung on for the victory, with striker Keita Baldé bailing out his defenders with a hacked clearance from a cross deep into injury time.