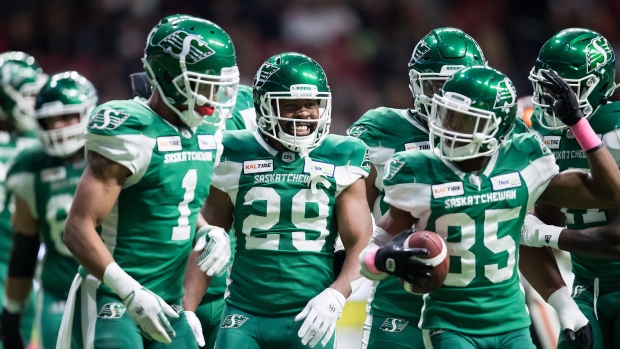 VANCOUVER — The Saskatchewan Roughriders got back in the win column Friday night, but quarterback Cody Fajardo still wasn't happy after the game.

"I'm a little frustrated right now because I don't think that game should have been as close as it was," he said after the Riders beat the B.C. Lions 27-19 in Vancouver. "And I'm tired of those heart-beating games."

Saskatchewan (11-5) is locked in a heated battle with the Calgary Stampeders and Winnipeg Blue Bombers for top spot in the West and home-field advantage for the playoffs.

"If we want to win a Grey Cup like we talk about, we've got to be able to finish in the redzone, we can't kick field goals, because better teams are going to beat us," he said.

Strong defence limited both sides to going for field goals over major strikes in Friday night's contest. Each team tallied four, including a 52-yarder from Saskatchewan's Brett Lauther and a 50-yard bomb by B.C.'s Sergio Castillo.

The Riders held a 12-9 lead at the end of the second quarter after running back William Powell smuggled the ball across the goal line for the first touchdown of the night.

During halftime, Saskatchewan coach Craig Dickenson told his squad they needed to play to their standard.

"That means finishing with the ball in the endzone. I thought our offence came out in the third quarter and responded and did a better job," he said.

"I do feel like we worked hard. We just didn't play as sharp as we want to. And I think the message to the guys was 'Be happy with the win. But work hard to improve.' "

Despite the frustration, Fajardo liked the way his offence moved the ball against the Lions (5-12).

He threw for 224 yards, including a touchdown, completing 21-of-27 attempts.

Powell added to the victory, rushing for 111 yards and a touchdown.

"He's a good football player. I'd love to just give him the ball as much as we can," said Riders coach Craig Dickenson. "He seems to get better as the game goes on and get better with more touches."

But Powell, too, believes the Riders have work to do before embarking on a post-season run.

"We just want to keep getting better every day," Powell said. "We want to be a balanced offence going into this last two games and into the playoffs. We just want to make sure that we're able to mix it up and attack through the air and on the ground."

Danny O'Brien slotted into the quarterback position, making the first start of his CFL career. He threw for 171 yards and a touchdown in the effort, completing 16-of-24 passes.

"For the most part, I think he managed the offence and did some things well. But there's also some rust of actually playing a full game," Lions coach DeVone Claybrooks said of the performance. "He also has to clean up some things as well and we expect him to."

O'Brien was temporarily replaced by Grant Kaemer in the third quarter. The rookie made good on 1-of-3 attempts and put up 18 passing yards before his league debut was cut short by an injury in the fourth frame.

B.C.'s first chance for a touchdown came 9:37 into the second quarter when Bryan Burnham made an eye-popping one-armed catch at the goal line. Officials on the field called the play out of bounds but Claybrooks used his challenge.

Replays on the big screen appeared to show the receiver getting one foot inside the playing field, but a review upheld the call on the field.

The Lions settled for a 30-yard field goal.

O'Brien and Burnham connected once again with just a minute and a half left on the game clock.

The quarterback fired a 30-yard pass to the edge of the endzone, where Burnham made yet another tough catch. Smothered by a pair of Lions defenders, the receiver wrestled his way over the goal line for B.C.'s lone touchdown of the game.

Burnham now has a career high 1,401 receiving yards this season.

The performance didn't come as a surprise for Claybrooks.

"I'm blessed and fortunate to have (Burnham) on my team," he said. "And I'm glad I don't have to cover him."

The Roughriders will be back in action on Oct. 26 when they visit the Edmonton Eskimos. The Lions have a bye next week before wrapping their season with a home battle against the Calgary Stampeders on Nov. 2.

NOTES: Saskatchewan's Dan Clark was injured midway through the second quarter. The veteran offensive lineman lay on the field for several minutes being looked at by trainers before walking off on his own. Clark did not return to the game. ... Friday marked the first game Reilly has missed this season. The league's passing leader fractured his wrist early in last week's loss to the Edmonton Eskimos. ... A crowd of 18,043 took in the game, including many boisterous Riders supporters.