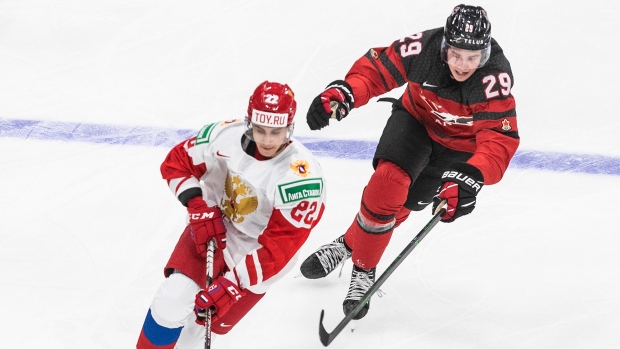 "What I like about Jack is he can do everything on the ice," said head coach Andre Tourigny. "He can be a good checker. He can play really well defensively. I think his focus right now needs to be on his complete game. His focus is, he wants to produce offensively. He was playing with Dacher and Cuzzy and didn't want to answer the bell. Quinner has to get back to the player he is. He's a complete player. He's a competitive player. He's a little [expletive] to play against and he needs to play that way."

For some, getting demoted before the tournament even starts would be a tough pill to swallow, but Quinn also plays for Tourigny in Ottawa so they have a built-in understanding and trust.

"Pre-tournament game wasn't my best," Quinn admitted. "He expects a lot out of me and I expect a lot out of myself so I think the message was clear: I need to take care of the puck and that's what I'm going to do today."

Yesterday's practice was more about sending a message and Quinn, who scored 52 goals in 62 games last season, will actually open tonight's game on a line with Quinton Byfield and Jakob Pelletier. Quinn and Byfield also played together in one of the intra-squad scrimmages.

One player who needs no extra motivation is Cole Perfetti. The Saginaw forward is eager to show he deserved to be picked higher than No. 10 in October's National Hockey League draft. Tonight he faces Germany's Tim Stuetzle, who was picked No. 3 by the Ottawa Senators.

"I've never actually played him," noted Perfetti. "Just kind of seen video of him and heard about him. I've never seen him in person so kind of excited to see him and see what he plays like and, at the end of the day, just want to outplay him and be the best guy on the ice. He's a great player, but that's what I want to do and come out with a win at the end of it."

So, the draft is on his radar ahead of tonight's game?

"Yep, for sure, got to prove everyone wrong, so that's kind of my mindset."

With Dach out, Perfetti has earned a promotion to Canada's top power play unit where he will set up on the half wall.

"I can bring my shot and my vision and make plays from there," the Winnipeg Jets prospect said. "Both units are so talented, but especially that unit. You just got to get in position and guys will make plays for you."

Assistant coach Michael Dyck, who works with the power play, highlighted Perfetti's ability to distribute the puck under pressure and also when given time and space as important assets on the man advantage.

"We have some structure when it comes to entries and recoveries and face-offs, but there's some freedom and once they gain possession of the puck they can run on instinct and he's certainly one of the better guys at that," Dyck said.

Canada went 0/3 on the power play in Wednesday's game against Russia and spent significant time on it at practice yesterday. They didn't work on special teams in Tuesday's practice.

Stuetzle played 26 minutes yesterday against the Finns and it's unclear how much he and his teammates will have left in the tank. Germany only has 14 skaters available due to some positive COVID tests.

Tourigny is warning his players against complacency.

"It's a trap, but there's a challenge there," the coach said. "If our opponent dictates our performance that means we do not own our own game, so we have to focus on what we have to do. We need to get better than we were yesterday at practice."

Tourigny twice stopped yesterday's practice to give the group a tongue-lashing.

"The big thing for us is we want to be urgent every day we jump on the ice," said Tourigny. "At the World Juniors the biggest challenge might be to try and be better every day and whoever improves the most will have the bigger chance to win the gold medal. Yesterday, after a day off, it's always a day when you have a bit of rust, but we don't have that luxury ... The execution can be off a little bit, but not the focus so the Bear barked a little bit and we got back at it and the players responded really well."

Team Canada is using the slogan "In This Together" as a rallying cry during the World Juniors.

"We went through a lot of adversity," noted Perfetti, "and we wouldn't be able to do it if we weren't in it together and one team and that's one of our mottos now. We've come so far and been through so much so we will keep going and stay as one."

The words have meaning beyond the team's dressing room.

Imagine my surprise, when up to my room comes a beautiful white team Canada jersey, signed by the ENTIRE #WorldJuniors Canadian roster. My jaw slammed into floor. pic.twitter.com/DzD9Jf6kJp

All the players and staff members have reached out to someone who has handled these trying times with "humility, poise and courage" and sent them a signed Team Canada sweater.

"I gave it to a boy back home named Owen Rose," said Perfetti. "He's a four-year-old and he's been battling a disease. It's been tough on him. He loves the game and he plays in Whitby minor hockey and my mom told me his story. He's an inspiration. Through everything he goes through his joy is coming to the rink and playing hockey so he's inspiring and I'm playing for him this tournament and hoping he's having a good Christmas."