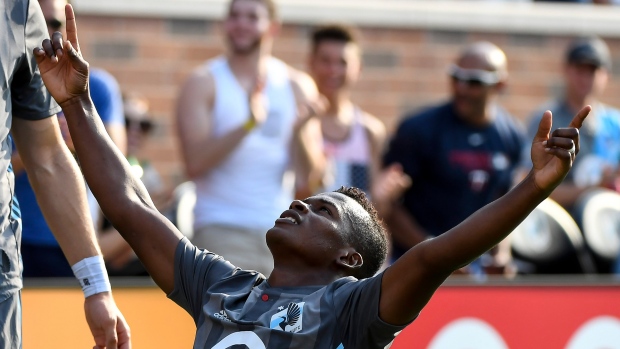 MINNEAPOLIS — Toronto FC seemingly can't stop teams from scoring against them in the first half.

TFC has conceded 10 goals in the first 15 minutes of games this season, worst in Major League Soccer.

"We give balls away that we shouldn't, we can't make plays to put fires, we're a little bit deep in moments. I can't put a finger on it," said Toronto FC captain Michael Bradley. "There's a lot of different reasons. You can look at each goal and ultimately talk your way through it ten different times. The frustrating part is that in so many games, we haven't given ourselves a chance.

"We start the game down 1-0, down 2-0 too many times. You have to be able to play from behind in moments, but we have had to do it way too often this year."

Minnesota United (6-1-10) snapped a three-game losing streak that included a 1-0 loss to FC Dallas on Friday at TCF Bank Stadium.

Quintero got his first goal eight minutes into the match, splitting two defenders and firing into upper left corner for a 1-0 lead. His second goal, in the 52nd minute, was just off the fingertips of Toronto FC keeper Clint Irwin and his third came just five minutes later, bending in a shot from the left side, over Irwin's fingertips and into the upper right corner.

Justin Morrow, Sebastian Giovinco and Jordan Hamilton had Toronto FC's goals. Hamilton got the Reds (4-3-10) within one with just a minute left in stoppage time.

Toronto FC has conceded 34 goals at the midway point of this season. They gave up 37 goals the whole of last season, when they won their first-ever MLS title.

Asked if his team could still make the playoffs despite sitting 10th in the Eastern Conference Bradley was terse.