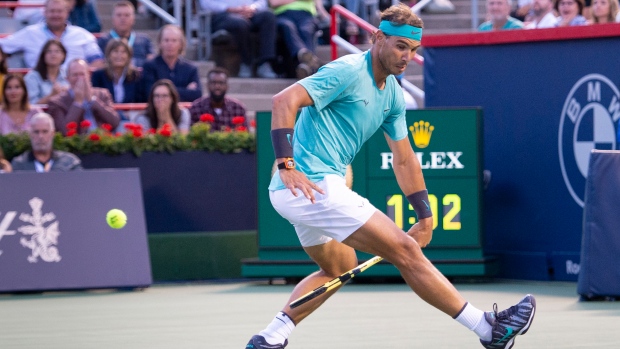 MONTREAL — Rafael Nadal strode into the interview room Friday and glanced at a television monitor to his right.

The ominous clouds that had been gathering throughout his evening quarterfinal match were finally opening up.

The 33-year-old Spaniard shrugged and got on with the press conference — much the same way he dealt with an early scare that could have derailed his quest for a fifth Rogers Cup.

Nadal battled back from a set down to defeat Italy's Fabio Fognini 2-6, 6-1, 6-2 at a wind-swept IGA Stadium to advance to the tournament's semifinals for the seventh time.

"I was not playing bad," the top seed and No. 2 player in world said of the deficit. "No negative feelings on the ball.

"I had been playing probably a little bit better than him, but the score was against me."

While he doesn't have the legs he once had, Nadal owns the smarts to overcome the type of adversity he faced on centre court.

"I lost things on the road so I just tried to add other things," Nadal added. "One of the things that I'm most satisfied with is I've been able to always find a solution to keep being competitive at the highest level."

Nadal will meet either countryman and No. 10 seed Roberto Bautista Agut or No. 16 Gael Monfils of France in the semifinals.

Their quarterfinal was postponed until Saturday due to inclement weather with Monfils leading 30-0 in the first game of the first set.

Meanwhile, there will be an all-Russian showdown on the other side of the bracket after Daniil Medvedev breezed to a 6-3, 6-1 upset of Dominic Thiem before Karen Khachanov followed with a 6-3, 6-3 defeat of Alexander Zverev at the US$5.7-million ATP Tour Masters 1000 series event.

This year's women's tournament, where teenager Bianca Andreescu of Mississauga, Ont., advanced to the semis, is being played in Toronto.

Nadal, the top seed with Novak Djokovic and Roger Federer skipping this year's event, was broken by Fognini in the third and fifth games of the first set.

But the defending champion from the 2018 Rogers Cup in Toronto found his rhythm in the second, breaking Fognini, the seventh seed, in the second game when the world's 11th-ranked player double faulted to go down 2-0.

The pair then gave fans an incredible rally in the fifth game that included a between-the-legs shot from Nadal before Fognini deadened the ball at the net to win the point. Nadal fought off a subsequent break and secured one of his own on the way to winning 6-1.

Nadal broke Fognini, 32, again to open the third set, and the Italian requested a medical timeout during a changeover down 3-1 to get his right foot/ankle tapped.

It didn't matter as Nadal broke Fognini once more to lead 4-1 before holding serve from there to advance to the semis in one hour 57 minutes.

"Another opportunity to be in another final," Nadal said. "Will be great if I am able to make that happen."

Nadal improved to 12-4 in his career against Fognini, who snapped a six-match losing streak against the Spaniard on the way to winning in Monte Carlo back in April.

"Everybody knows he's one of the big talents on tour," said Nadal, who lost to Fognini in the third round of the 2015 U.S. Open. "He's had some up and downs. When he's playing well, these kind of players that can produce amazing shots."

With the win, Nadal made the Rogers Cup semis in Montreal for the first time since 2013 when he beat Canada's Milos Raonic in the final. He also won the event here in 2005 — his first hardcourt victory — and in 2008 in Toronto.

Earlier on Friday, the eighth-seeded Medvedev needed just under 57 minutes to finish off Thiem, the No. 2 seed from Austria.

Medvedev won a whopping 96 per cent of his points on first serve and never faced a break point to grab his first victory in three meetings with Thiem.

"I was expecting a tougher match," said the 23-year-old Russian, who's ranked No. 9 in the world. "It saved me a lot of energy."

Thiem, the fourth-ranked player overall, won a tournament in his native Austria last week, but admitted travel and a tough couple of matches to open the Rogers Cup wore him down.

The sixth-seeded Khachanov, who downed hometown favourite Felix Auger-Aliassime on Thursday to advance, also made quick work of Zverev and should be equally well-rested Saturday.

The 23-year-old broke his frustrated German opponent in the very first game and never really looked back in a 75-minute victory.

"He didn't play his best, of course," Khachanov said. "On the other side, I played a good match tactically."

Zverev, the third seed and No. 7 player in the world, slammed his racket in frustration in the first set, which elicited a negative reaction from the crowd.

The 22-year-old Rogers Cup champion in 2017 gave the damaged hardware to a young fan in the front row, but the support he enjoyed at the start of the match began to wane.

Khachanov, ranked No. 8, blasted a ball out of the venue during Thursday's win over Auger-Aliassime in frustration at crowd noise during play, leading to loud boos.

"It was obvious that when you play against local guy, Canadian, the crowd would be mostly on his side," Khachanov said. "But today was 50/50, it was really nice."

In June, Khachanov became the first Russian to be ranked in the top-10 since Mikhail Youzhny in February 2011, and Medvedev joined him last month.

Born just over three months apart, the Moscow natives squared off in the semifinals of their hometown tournament in the players' only previous ATP Tour meeting last October, which Khachanov won 6-1, 6-7 (5), 6-3.

He went on to win the event, his third of four career titles.

"Never easy to play against a friend from the same country," Khachanov said of Saturday's rematch. "We know each other pretty well."