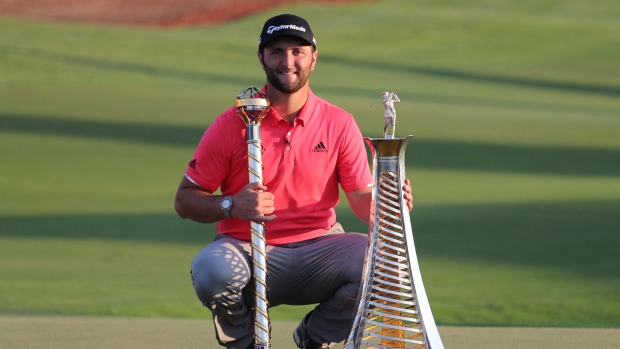 DUBAI, United Arab Emirates — Jon Rahm was still getting his head around the biggest, gutsiest and richest victory of his career when the name of his golfing idol was dropped into the conversation.

By winning the Race to Dubai title on the European Tour with a one-stroke win at the World Tour Championship, Rahm was reminded, he became only the second Spaniard after the late Seve Ballesteros to finish a season as Europe’s No. 1 player.

“Did I? Oh man, I didn’t even think about that,” an emotional Rahm said, putting his hands to his face after forgetting the narrative he had spoken about all week in the Middle East.

Maybe that’s what landing a jackpot of $5 million does to you.

Rahm, the world No. 5, got up and down from a greenside bunker for birdie at the 18th hole to secure the biggest payday of his career Sunday — $3 million, the richest first prize in golf, for winning the World Tour Championship and a bonus of $2 million for finishing first in the Race to Dubai.

“I feel like I’m going to start crying,” said Rahm, who pushed Tommy Fleetwood — who also would have become European No. 1 with a win on the Earth Course — into second place.

Rahm, who started the final round tied for the lead with Mike Lorenzo-Vera, birdied five of his first seven holes to power into a six-stroke lead.

However, Fleetwood — playing one group ahead — finished as well as Rahm had started, tapping in at No. 18 for a fifth birdie in his last seven holes. It gave him a 7-under 65 and a share of the lead with Rahm, just as Spaniard was putting on the 17th green.

Rahm’s birdie putt there came up a few centimetres short so he needed a birdie on the par-5 last for the win. His drive was perfect, his approach leaked right and found the bunker, but he chipped out to 4 feet and rolled in the putt for a 68 as Fleetwood watched in the scorer’s tent. Rahm finished on 19 under par overall.

“Fair play to Jon,” Fleetwood said. “Cracking birdie down the last when he needed to make it.”

When Rahm was on the 16th tee, he said he recalled something Jack Nicklaus said when the 18-time major champion spoke about his British Open win in 1966.

“I heard Jack said once, about the Open Championship in Muirfield when he won, he told himself if you finish 3-4-4, you win,” Rahm said. “I told myself, ‘Jon, you’re on 16, one-shot lead, finish 4-3-4, you win the tournament.’ And I played three great holes.

“I have cruised to a win, luckily for me, before. I have never had to grind it out after losing a lead like that.”

Rahm then switched his thoughts to another golfing icon.

"Seve is such an idol for all of us,” Rahm said about Ballesteros, a six-time winner of the European Tour’s Order of Merit title. “And so are Sergio (Garcia) and Olly (Jose Maria Olazabal) and so many of the great Spanish players. And to think that I'm putting my name there before they do is hard to believe.

"I can't believe some of the things I've accomplished."

Fleetwood, who started the day four shots off the lead, was eight strokes behind after Rahm’s flurry of birdies in the opening seven holes. Still, he managed to take Rahm all the way.

“Proud of the way I played the last few holes, proud of my season,” said Fleetwood, who won the Nedbank Golf Challenge in South Africa last week to move into contention for a second Race to Dubai title in three years.

Fleetwood finished second in the Race to Dubai standings, with Bernd Wiesberger in third place.