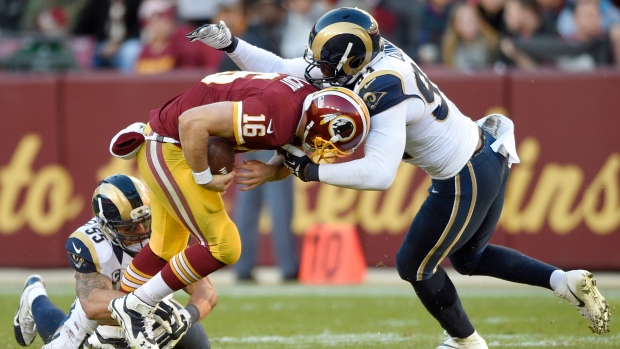 LANDOVER, Md. - On a day in which the St. Louis Rams finished off their first back-to-back set of shutouts since 1945 — and made a not-so-subtle statement about getting the better of the Robert Griffin III trade — they again sent a message that's bigger than football.

Several Rams players wrote the words "I Can't Breathe" on their equipment Sunday, displaying the message before and during a 24-0 win over the Washington Redskins.

"I feel like we should support what we feel is right," said guard Davin Joseph, who had the words on his cleats during the pregame warmup.

Some were among the group that performed a "Hands Up, Don't Shoot!" show of solidarity — and were criticized for their activism — before a home game a week earlier in the wake of a grand jury's decision not to indictment the police officer who shot Michael Brown in Ferguson, Missouri.

The "I Can't Breathe" message references Eric Garner, who died at the hands of a New York police officer in a case that also did not get an indictment from a grand jury.

"Every life in this world is worth something, and when you lose one, it hurts, no matter who it is," Joseph said.

As football players, the Rams are doing a good job separating their protests from the work they're doing between the white lines, taking advantage of a plummeting franchise for the second straight week. They routed the Oakland Raiders 52-0 a week earlier and now stand at 6-7, a decent showing for a season that could have fallen apart after Sam Bradford's knee injury in August.

The Rams hadn't blanked two opponents in a row in 69 years, since the Cleveland Rams beat the Chicago Cardinals 21-0 and the Chicago Bears 17-0.

That would be never. Brockers will get a chance to back up the guarantee at home against the Arizona Cardinals on Thursday.

Brockers also proclaimed a boastful victory in the RG3 trade. He was one of six Rams in Sunday's game — all of whom took part in the coin toss — who were part of St. Louis' three-year haul stemming from the mega-deal that allowed the Redskins to select Griffin at No. 2 overall in the 2012 draft.

"I will always be remembered as (being a part of) that blockbuster trade," Brockers said. "And, you know, the Rams won. The Rams won that one."

Griffin was benched two weeks ago by coach Jay Gruden, but he made an appearance Sunday in the final two minutes after starter Colt McCoy suffered a sprained neck while getting sacked for the sixth time. McCoy was taken to a hospital for X-rays.

Griffin was sacked once during his brief appearance, making the Rams' total seven for the game and 29 in their last six games. St. Louis limited Washington to 206 total yards. Jared Cook caught a pair of touchdown passes, and Tavon Austin returned a punt 78 yards for a score.

The Redskins (3-10) dropped their fifth straight and clinched their fifth double-digit loss season in six years as they head into another December of turmoil that will focus on the futures of coaches and quarterbacks. The offence was booed again in a half-empty stadium.

"I've said rock-bottom once before," Washington linebacker Ryan Kerrigan said. "It downplays what rock-bottom is if you keep saying (it) every time you lose."

McCoy completed 20 of 32 passes for 199 yards with two interceptions. He's been sacked 12 times in two weeks. Gruden said he'll have to learn more about McCoy's neck injury before deciding on a starter for next week.

The Redskins played without their principle downfield threat, DeSean Jackson, who sat out with a bruised left shin after not practicing all week. Alfred Morris rushed for a meagre six yards on eight carries.

NOTES: The Rams from the Griffin trade who played were Brockers, Janoris Jenkins, Alec Ogletree, Greg Robinson, Stedman Bailey and Zac Stacy. ... St. Louis K Greg Zuerlein missed an extra point, a 28-yard chip shot and a 38-yard attempt — all wide right — before sneaking one just inside the upright from 34. After the game in the locker room, coach Jeff Fisher turned Zuerlein's day into a light-hearted moment by having holder Johnny Hekker put the ball down and Zuerlein kick it into a locker in front of the team. "Anytime you have a day like this, it's never easy to show your face around everyone," Zuerlein said. "But coach Fisher is awesome."