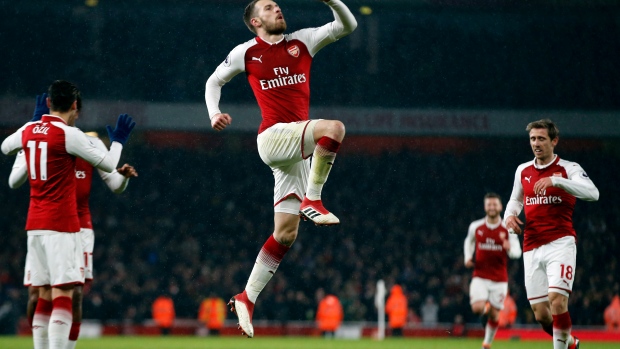 TURIN, Italy — Aaron Ramsey could play his first match for Juventus against a familiar foe if he recovers from injury in time.

Ramsey joined Juventus this month on a four-year contract after leaving Arsenal on a free transfer when his contract expired.

The midfielder is still recovering from a hamstring injury sustained in the Europa League quarterfinals and a decision will be made "over the next few days" whether he goes with Juventus on its preseason tour of Asia — where its first game will be against Arsenal's north London rival Tottenham.

"I have had a small injury; it is progressing nicely. We are taking it day by day and I am feeling stronger," Ramsey said on Monday, at his first news conference as a Juventus player. "Nothing has been set in stone about whether I go or not. I am confident with the way it is going that I will be back soon."

Ramsey, who had been at Arsenal since 2008, agreed to join Juventus back in February and so has had a few months to learn Italian.

However, the Wales international still impressed when his first words at his news conference were in Italian.

"I want to thank you all for being here and I'm very happy to be here at Juventus," Ramsey said. "They're one of the best teams in the world. I'm working hard with the rest of the group to be ready as soon as possible."

The 28-year-old Ramsey said a few other clubs had expressed their interest but that it was an easy decision for him.

"When I heard that Juventus were interested in me, I thought it would be a dream to come here, as well as a great challenge," he added. "You can't turn down this opportunity. This is the right club for me. I hope to be a part of the history."

Juventus has won the Serie A title the past eight seasons, as well as four Italian Cups, but it craves Champions League success.

It hasn't won Europe's premier club competition since 1996 although it has finished runners-up five times since — including twice in the past four years.

Even signing Cristiano Ronaldo last summer didn't help as Juventus was eliminated by Ajax in the quarterfinals, ultimately leading to the departure of Massimiliano Allegri as coach at the end of the season and the hiring of Maurizio Sarri.

Sarri was the coach of Chelsea last season and saw his team beat Arsenal 4-1 in the Europa League final — with Ramsey injured.

"I think from what I saw last season, he had a good season at Chelsea," Ramsey said. "He was definitely a success and hopefully he can bring his philosophy and style to this team."