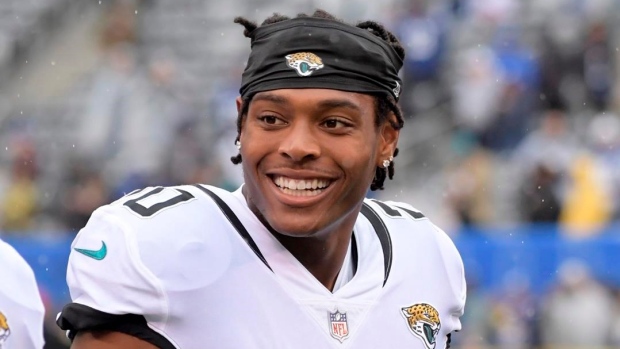 The defending NFC champions believe the potential rewards are well worth it.

"You want guys with some swag, some personality," coach Sean McVay said Wednesday while he awaited the star cornerback's arrival at their training complex. "As long as those guys love football, they love competing every single day, I think this is a building that will suit him well."

Ramsey spent the day travelling and finally arrived at the Rams' training complex Wednesday night. Los Angeles traded two first-round picks and a fourth-rounder Tuesday for an elite defender whose tumultuous tenure with the Jacksonville Jaguars ended early in its fourth season.

"I was overjoyed," Ramsey said of his reaction to the deal. "I was super, super excited. A fresh start, and a fresh start in a place like LA, with the culture that I've heard about (with the Rams), and I'm a young guy still, and everybody around here is kind of young, I feel like it'll be a little bit more understanding. I was just honestly super-excited. Words can't really describe it."

The Rams are sold on Ramsey's talent and publicly convinced of their own ability to channel it into a big role on a winning team. General manager Les Snead said he has already spoken to Ramsey's agents about his future beyond his current contract, which ends in 2020, and that both sides were encouraged by the conversation.

"We actually did talk to his representatives and give our long-term view, and (get) his," Snead said. "We did put a little bit of a timeline in place. I don't want to give too many details on that, but we're just meeting Jalen today. He has earned a chance to probably get a nice contract for the job he does and the position he plays."

Ramsey agrees, as he demonstrated in July when he showed up to training camp with the Jaguars in an armoured bank truck.

When asked his immediate thoughts about a contract extension with LA, Ramsey said: "I'm not worried about it. It'll happen in due time. I have full confidence in myself and my abilities, and I think I'll continue being the best corner in the league for years and years and years to come, so it'll handle itself."

The Rams have time to figure out a number that works for both parties — but they have less time to turn around a season that has stalled.

McVay and Ramsey both hope he will play Sunday at Atlanta when the Rams (3-3) attempt to end their first three-game losing streak since 2016, although the corner will need a medical exam first. Ramsey missed the Jaguars' last three games with a back injury but returned to practice recently.

Even in their depleted state, the Rams felt Ramsey was too good to pass up. Peters and Talib will be unrestricted free agents after this season, and the Rams were more interested in getting Ramsey than in retaining Peters.

"There's only a handful of players like that, and he happens to be one of them," Snead said of Ramsey. "Not saying that there's not a lot of good corners out there, but since he's been in the league, he's shown the ability to get out on an island."

Snead and the Rams have a reputation for rewarding their elite players : In the past two years, they've handed out the largest contracts in NFL history for a defensive tackle (Aaron Donald), a running back (Todd Gurley) and a quarterback (Jared Goff), and they gave a huge extension to receiver Brandin Cooks before he played his first game for Los Angeles last year.

"I've heard the culture here is dope," Ramsey said. "Can't wait to be a part of it, honestly. Can't wait to be able to be myself, on and off the field, and just help the organization in every way that I can."

Snead is well aware of Ramsey's contentious reputation after the cornerback repeatedly clashed with coaches, the front office and opponents during his tenure in Jacksonville. Los Angeles hasn't hesitated to acquire players with similar reputations — like Peters and Talib, for instance — but has had no public problems with them in McVay's system.

"When you do research on it, the first thing I want to know is, do they love football?" Snead said. "Is this the chapter they're focused on? And do they love winning? Ultimately, we're all going to go through some situations (and) you're going to have some outbursts, but a lot of times, with the research, it was maybe because of a loss or a bad play or things like that. These are young kids, so they don't have the emotional intelligence that I've acquired, but probably didn't have at Jalen's age."

"He's got a brand that he wants to get out there and have people in the world see, and there's nothing wrong with that," Bortles said. "There's a lot of guys that have that and promote that. When he shows up to work and puts his pads on and goes to play football, it's all business. I think all that stuff kind of gets pushed away and he's totally focused on football. In the meantime and in his free time he does some funny things."

Fowler believes a move out West will spark Ramsey's passion for the game, just as it did for him last season.

"You can never complain when you're coming out to LA," Fowler said. "Really, he's one of my favourite teammates that I've ever had. ... We don't judge a person cause they do this or do that. We embrace personalities. When Marcus was here, we embraced his personality. Jalen is going to be the same way."