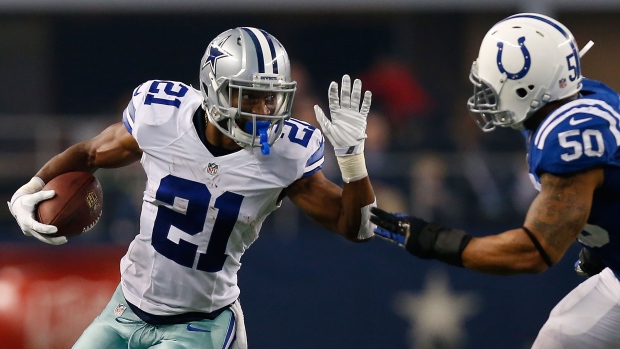 Wichita, KS (SportsNetwork.com) - Dallas Cowboys running back Joseph Randle's ex-girlfriend Dalia Jacobs, also the mother of his child, has filed a petition for a protective order against him.

The Wichita Eagle obtained a copy of the petition in which Jacobs describes the scene of events that took place earlier this week.

Officers responded to a domestic violence call, made by Jacobs, involving a weapon at a hotel, where they observed a small amount of marijuana in the room, which was rented to Randle.

Randle was cited for possession and given a date to appear in court and police considered it an arrest because of the small amount of marijuana found in the room. A firearm was not found by police.

Police spokesman Lt. James Espinoza said the suspicion of marijuana possession charge was dropped Friday because there were some inconsistencies.

"The defendant became angry with me in the presence of our child," Jacobs wrote in the petition. "I told my friend to take our son out of the home. She got into the vehicle with my son in the passenger seat. The defendant walked to his vehicle and retrieved a handgun.

"He then proceeded to approach the vehicle and point the gun at my friend in the vehicle. He told me at this point that he was going to 'blast the vehicle.' My friend tried to cover up my child with her body. The defendant then smashed the window with his fist, causing glass to shatter across my friend and my child."

Jacobs also said Randle "has a violent temper and gets angry very quickly."

In October, Randle was arrested at Dillard's department store in Frisco, Texas, on a class B misdemeanor charge of theft between $50 and $500. The items he was accused of stealing were men's underwear and cologne.

Randle carried the ball 51 times for 343 yards and three touchdowns this past season.