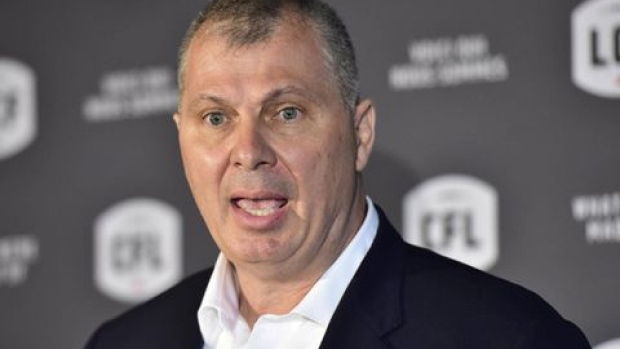 TORONTO — The only certainty CFL commissioner Randy Ambrosie has these days is uncertainty.

Ambrosie can't say definitively that CFL training camps will open on time due to all the unknowns surrounding the COVID-19 pandemic. As a result, the league is pondering all possible contingency plans.

"Really, everything is on the table and nothing has been decided."

A source said the league told its teams Thursday morning only players rehabbing injuries can be at their training facilities effective immediately due to novel coronavirus concerns. And even then, only one is allowed to be present at a time.

That's a huge blow to players working out and trying to stay in shape because many public gyms have temporarily closed.

Currently, rookie camps are scheduled to open May 13 with training camps to follow May 17. The exhibition season would begin May 24 with each team playing two pre-season contests.

The regular season would kick off June 11.

A late start to training camp, however, would not only affect the exhibition season, but also the scheduled start to the regular campaign. And it could also impact the number of regular-season games played.

The Grey Cup game is scheduled for Nov. 22 at Mosaic Stadium in Regina.

Ambrosie said even the dates for the CFL's global and national drafts aren't etched in stone. The former is currently scheduled for April 16 with the latter going April 30.

"I don't think it would be fair for anybody to say that anything is certain at this point on any issue, really," Ambrosie said. "We're listening to a lot of really smart people, we've got a great team of medical experts (who are) helping guide us.

"But one of the things we're certain of is that there's very few things that are certain."

The NHL, NBA, Major League Soccer and Major League Baseball have either ceased their seasons or pushed back the start of action as a result of the novel coronavirus outbreak. Last week, the CFL cancelled its Eastern and Western regional combines as well as its national combine slated for March 26-28 in Toronto.

"The decision wasn't hard," Ambrosie said. "The reality that we were putting those dreams of playing professional football on hold was very painful for me personally and everyone in the league who recognized it would be hard on the players.

"I think of every kid who's played this game and trained and been in the gym and up early. I lived that back in my day, all of it kind of targeting around the idea you were about to see the fruits of your labour. It was difficult."

The pandemic will result in the temporary shutdown of the Canada-U.S. border for all non-essential travel, with Prime Minister Justin Trudeau saying that's likely to happen Friday night. If that continues for the long term, it would theoretically become impossible for American-born CFL players to get into this country.

"You just have to live in the moment," Ambrosie said. "For the time being that's what's in place."

Ambrosie said there's been no hard deadline established regarding when the contingency plans must be agreed to.

"Again, what we're trying to do is create framework," Ambrosie said. "We've always said that one of our core strengths is being nimble, that we can move quickly.

"But the way to move quickly is to define how our actions will happen or what has to happen in order to make our actions happen so that you're not stuck in process later. What the teams and governors have been really supportive of is this idea of building good framework so when it comes time that we know what we need to know, we can take action quickly as required."

And Ambrosie said it's important the CFL Players' Association be involved in this process.

"We want this to be a time where our relationship with our players can elevate," Ambrosie said. "If there ever was a phrase that we're all in this together, boy, this is it.

"In the moment, if I'm upset about anything it's that one of the things our league has stood for is our players have been unsung heroes. Not to what it relates to what they do on the field, it's how much impact they have in their communities ... and I'm just anxious to get back to doing that good work.

"Of course, down the road there'll be time for football again. But today our attention is on doing the right things and being good citizens of Canada and our global community."

This report by The Canadian Press was first published March 19, 2020.