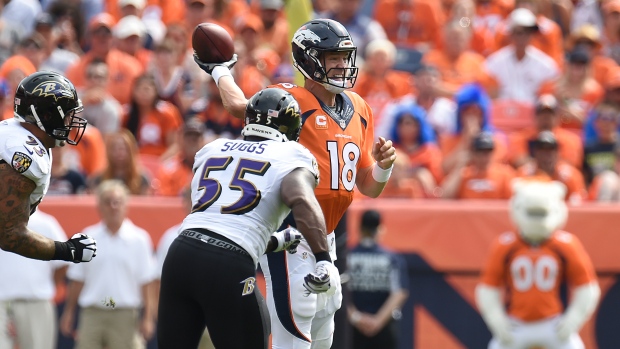 The Baltimore Ravens lost more than just a game on Sunday.

Pro Bowl pass rusher Terrell Suggs tore his Achilles in the team's 19-13 loss to the Denver Broncos and is out for the year, the Ravens announced.

Terrell Suggs tore his Achilles and is done for the year.

Suggs, 32, is a six-time Pro Bowler and sits seventh among active players in sacks with 106.5. He recorded 12 sacks last season.

"I don't even know what happened out there," Ravens coach John Harbaugh said. "All of a sudden, I look back and he was on the ground. But these are the things in life that happen. Adversity is all about how you respond to it, how you react to it."

Ravens linebacker Elvis Dumervil said it was a huge loss.

"You can never replace a Terrell Suggs, a big emotional leader for our team," Dumervil said. "It hurts everybody, whenever you hear news like that."

Suggs was the NFL's defensive player of the year in 2011.