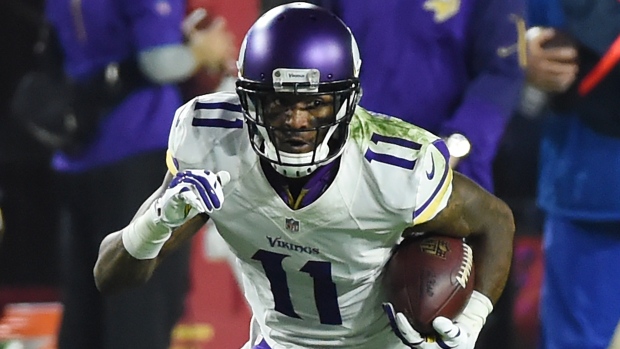 Released by the Minnesota Vikings on March 8, the 29-year-old Wallace joins his third team in as many years after beginning his career with Baltimore's AFC North rival, the Pittsburgh Steelers.

"It feels weird being on the other side, but I'm all for it," Wallace said. "I've just got to switch my whole mentality. I used to hate purple; now, I love purple."

The move was announced at the Ravens training complex, where on Wednesday the team is expected to introduce safety Eric Weddel, who agreed to terms on Monday.

Wallace caught 39 passes for a career-low 473 yards and two touchdowns in 2015, but he should provide strong-armed quarterback Joe Flacco and the Ravens the outside speed they've been lacking.

"This is a team where you have a quarterback who can really sling the ball," Wallace said. "That's what I need to get back to, being able to have opportunities."

He added: "I want to get back to what I do and that's stretching the field and making some plays. I just want to be with a good quarterback, a Super Bowl-winning quarterback right here."

The Ravens hope the 2011 Pro Bowl selection will bring a downfield threat to the league's eighth-ranked passing game, which was without veteran Steve Smith and first-round rookie Breshad Perriman for much of last season.

"It's going to cause people some problems," coach John Harbaugh said. "You've got some considerations back there on defence if you're going to put your defence over one guy or another guy and leave some pretty talented guys open on the other side. That's going to create some problems for defences."

Drafted in the third round of the 2009 draft by Pittsburgh, Wallace has caught 414 passes for 6,307 yards and 49 touchdowns in seven years. Before joining the Vikings, he spent two seasons with Miami.