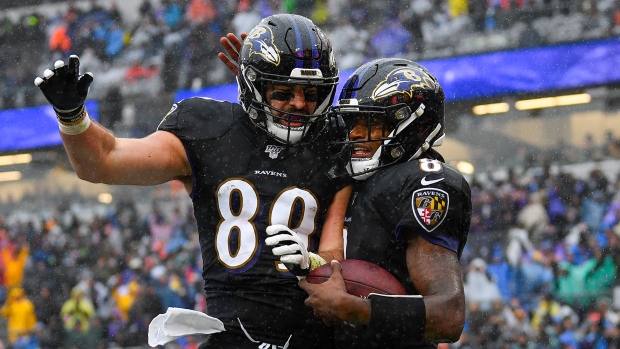 OWINGS MILLS, Md. — Mark Andrews is part of a group of Baltimore Ravens tight ends he likes to call a “three-headed monster.”

Andrews, Hayden Hurst and Nick Boyle have each played a huge role in the offence and have become a favourable target for quarterback Lamar Jackson.

The three tight ends could be the difference again this week in Buffalo where Baltimore can clinch a playoff berth with a victory against the Bills.

“The three tight ends, the three-headed monster,” Andrews said. “All these guys, Hayden,, Nick, these guys are flat out ball players. It’s cool to see.”

The tight ends are not necessarily the primary read for Jackson. However, if his receivers fail to get open, Jackson knows he has three sure-handed targets capable of extending a drive.

“I’m just going through my progression,” Jackson said. “Sometimes, you just have to take what the defence gives you. Sometimes, they do a great job covering everyone downfield, so you just have to checkdown and hit a tight end to convert. That’s just how we play ball.”

Andrews is the most prolific of the three and leads the team in receptions (53), receiving yards (693) and touchdown receptions (seven). Andrews and his fellow tight ends also embrace their role as blockers, which has helped the Raven establish the NFL’s most prolific run game, averaging 207.8 yards per game.

“We're all so versatile, and we're able to do so much,” Andrews said. “And they use us in a really good way that kind of exploits mismatches, and it's really hard for teams to game-plan for three different tight ends. That's a big thing, and we've all done a great job. We're going to continue to get better, but it's fun to be able to play with those guys.”

Boyle is ranked third behind rookie receiver Marquise Brown with 25 receptions for 281 yards. Boyle, a five-year veteran, caught his first career touchdown pass Nov. 3 against the New England Patriots. In March, he signed a three-year, $18 million contract extension with the Ravens through the 2021 season.

“I love our tight ends. I love the whole room,” Baltimore coach John Harbaugh said. “I love everything about them, and I know that they know that they can even get a lot better. That's what they're focused on doing.”

Hurst was the Ravens first-round pick (25th overall) in the 2018 NFL draft. He battled some injuries in his rookie year but has been a critical playmaker this season. Hurst is ranked fifth on the team with 23 receptions for 213 yards and a touchdown.

Hurst made a pivotal play in the Ravens 20-17 victory over the San Francisco 49ers in Week 13. He kept the final drive alive by catching a pass in traffic on a fourth-and-2 and then had to grind his way to the first-down marker. That play helped set up Justin Tucker’s game-winning, 49-yard field goal. Hurst received his first game ball for his performance.

He said the relationship among the tight ends extends well beyond the playing field.

“Those two guys (Andrews and Boyle) are like my brothers,” Hurst said. “We are constantly hanging out off the field. We’re together all the time. ... We compliment each other really well when we’re on the field. It’s just fun to play with those guys.”