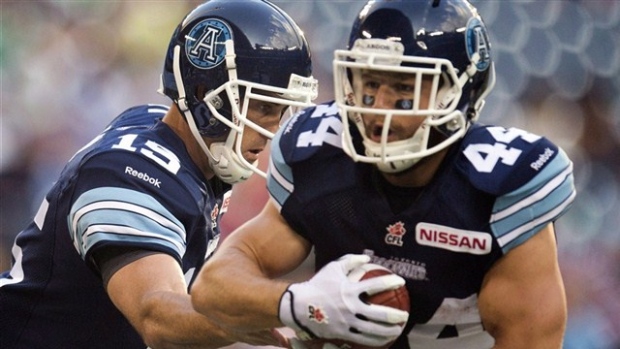 TORONTO - Chad Kackert is back as the Toronto Argonauts' strength and conditioning coach.

The Argos released the veteran running back from their practice roster Wednesday.

Kackert suffered a right hamstring injury last week during practice and was tabbed to miss four to six weeks.

He came out of retirement last month to join Toronto's practice roster in an attempt to return to the CFL team's lineup this season.

The five-foot-eight 206-pound Kackert broke his left ankle prior to the 2013 East Division final and retired on the first day of training camp this year because the injury hadn't healed sufficiently.

Kackert remained with the Argos as their strength and conditioning coach.

He was a big-play running back during his three seasons with Toronto, rushing for 1,467 yards and 12 TDs on 228 carries for a 6.4-yard average. He added 50 catches for 454 yards and two touchdowns.

Kackert was the 2012 Grey Cup MVP after rushing for 133 yards on 20 carries in the Argos’ 35-22 win over the Calgary Stampeders at Rogers Centre.