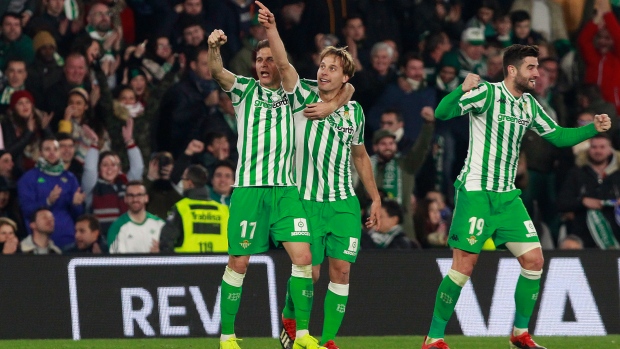 MADRID — Real Betis came from behind to beat Real Sociedad 3-1 in extra time on Tuesday, reaching the Copa del Rey quarterfinals for the second time in three seasons.

Forward Borja Iglesias scored twice in extra time after Sergio Canales equalized late in regulation in a round of 16 match played under heavy fog in Seville.

Iglesias netted with a left-footed shot from close range six minutes into extra time and then sealed the victory with a header in the 111th minute of the game.

Mikel Oyarzabal had put the visitors ahead after a breakaway in the 13th and Canales made it 1-1 in the 78th with a low shot from outside the area.

Both teams finished with 10 men as Sociedad's Asier Illarramendi was sent off in the 48th and Betis' Antonio Sanabria got a red card in the 76th.

Betis was eliminated in the round of 32 of the Copa in three of the last four seasons but made it to the semifinals in 2019, when it lost to eventual champion Valencia.

Sociedad made it to last season's final against Basque Country rival Athletic Bilbao. The final has been postponed because of the coronavirus pandemic and is yet to be rescheduled as officials try to wait for fans to be allowed to return to stadiums.

VILLARREAL BACK IN QUARTERS

Villarreal will be seeking its first semifinal appearance since 2015, when it was eliminated by eventual champion Barcelona. It was upset by second-division club Mirandés in last season's quarterfinals.

Levante won 4-2 at Valladolid in a game between two top-tier teams.

Toni Villa in the 13th and Shon Weismann in the 65th scored for the hosts. Levante got on the board with goals from Enis Bardhi in the 23rd, Mickael Malsa in the 45th, Coke Andujar in the 59th and José Luis Morales in the 80th.

Levante made it to the Copa del Rey quarterfinals for the first time since 2014, while Valladolid was seeking its first quarterfinal appearance since 2007.