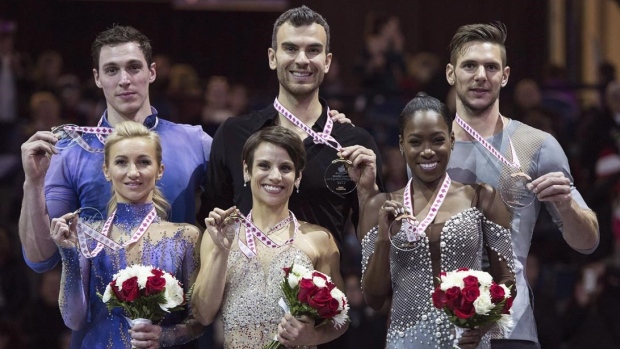 Now Canada's elite athletes have the spectre of COVID-19 threatening to derail their Olympic dreams before they even get to Beijing.

Radford and pairs partner Vanessa James are recovering from COVID-19 that could keep them out of the Canadian championships and Olympic trials this week in Ottawa. And the fact they've already had the virus might make them two of the lucky ones.

"Preparing for any competition, and especially the Olympics is difficult enough," Radford said. "It's one of the most stressful times of an athlete's life. Vanessa and I — and I think every athlete is probably thinking and feeling the same thing right now — there's this invisible minefield laid out in front of you over the next few weeks, as you try to dodge COVID and not become positive in the next couple of weeks, while trying to train for one of the biggest moments of your life.

"There are already stories rolling in about COVID dashing Olympic dreams. I hope athletes are being as vigilant as they possibly can over these next couple of weeks."

James, who'd planned to visit family over the Christmas break, had a positive PCR test on Dec. 23. Radford began feeling symptoms on the 23rd, and tested positive three days later, on Boxing Day. The two have been in isolation since the 23rd, and were only able to get back on the ice together Monday.

"It's a strange thing to say, but it’s almost better timing that we got it now … possibly preventing a positive test heading into Olympics," Radford said. "A lot of all of these athletes are all in the same boat. And we all are hoping and wishing the best for everybody else."

Toronto's James, and Radford, from Balmerton, Ont., said they'll decide by Thursday whether or not they'll compete this week, but are hopeful they can still be selected to the Canadian team based on results this season.

A major factor is being in isolation for the past 10 days, where it was nearly impossible to train at the level required by an elite athlete a month out from the Olympics. While James had virtually no symptoms, Radford said he felt like he had a cold, with a headache, body aches and stuffed nose.

The crush of COVID-19 cases caused by the new Omicron variant that is spreading like a prairie wildfire has seen the cancellation of Canada's mixed doubles curling trials and the IIHF world junior hockey championships in Alberta. Canada's bobsled team has 11 athletes and three coaches in isolation in Latvia, while Canada's women's hockey team had to shelve its pre-Olympic exhibition season due to an outbreak.

A threat that was barely on the radar a month ago has become like an Olympic event in itself. Athletes lucky enough to avoid COVID could be the ones winning medals.

The 2020 Summer Olympics, of course, were pushed back a year due to COVID-19 with Canada being one of the loudest voices in that decision. Would James and Radford support a similar postponement?

"I can't speak to the athletes who've been training for almost four years for this event," said James, who teamed up with Radford last spring. "I know that a lot of athletes want to get it done now, people who are going to retire … I'm hoping the Olympics will be held, but I'm hoping also and I'm sure that the competent people, doctors, epidemiologists, all the federations and the IOC are working to make sure that all of the athletes are safe and I put my trust in them, so we'll see. I'm hoping that it will be a safe event if it is held."

Radford said there was a similar level of anxiety ahead of the Tokyo Games, which were held with relative success last summer, albeit a year late.

"There's always so much uncertainty with such a huge event, and even more so trying to throw an Olympics in a COVID era," said Radford, who won two world titles with former partner Meagan Duhamel. "As athletes, we have to put our trust in the organizers, trust in their decision whether or not the Olympics can or should take place safely."

The Canadian championships will be held this week in front of no fans in Ottawa. Media will cover the event virtually. But making matters dicey, skaters aren't required to provide a negative test result to compete. And a positive test this week could potentially keep an athlete out of the Olympics because of the time crunch around pre-travel testing protocols.

Piper Gilles and Paul Poirier, Canada's top-ranked ice dance team and the reigning world bronze medallists, said they can only put their trust in their national sport organization to keep them safe.

"We know how big of a deal this is, and our Olympic dream could be taken away within days if something like this happens," Gilles said, the emotion evident in the rise of her voice. "But we can't really look at it, because if you do that we're gonna drive ourselves absolutely crazy, and it's not good mentally.

"If it happens, it happens. But I think we're taking every precaution that we can right now, and, and really looking at and focusing on the things that we can control in our environment, (such as ) what type of masks we're wearing."

The skaters all said they planned to drive to Ottawa to avoid risky travel, and then maintain distance at the rink from people outside their personal bubbles.

The U.S. Olympic figure skating championships are being held in front of a crowd this week in Nashville. Everyone attending the event must provide proof of vaccination or a negative COVID-19 test result take within three days of entering the arena.