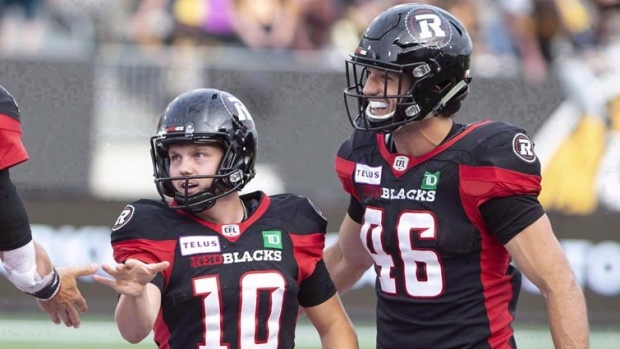 Lewis Ward always believed he could succeed in the CFL, but the Ottawa Redblacks rookie kicker admits he's exceeding even his own lofty expectations.

Ward has converted 48-of-49 attempts (98 per cent) this season. His lone miss was from 48 yards out in Ottawa's season-opening 40-17 home win over Saskatchewan on June 21.

An impressive feat, especially by a player who returned to the University of Ottawa last fall after being bypassed in the 2017 CFL draft.

"Coming into training camp, I felt I was able to be successful, I had that confidence in myself," Ward said. "But I'm a little surprised by some of what I've accomplished so far, absolutely.

"I never set out to break the record or do anything that I've done. But I did set the goal to make sure I'd try to be as successful as I could be."

Ottawa went to camp with kicking vacancies after incumbent Brett Maher, an American who did all three jobs last year, joined the NFL's Dallas Cowboys. Ward was somewhat of a longshot to make the Redblacks roster as CFL veterans Richie Leone and Sergio Castillo, both Americans, were expected to battle for the kicking duties.

"I don't think anybody could've," Desjardins said. "We knew he was a good kicker at the U Sports level and did many great things at Ottawa.

"We obviously saw him up close on many occasions but you can't predict this type of thing."

Ward made 24-of-29 field goals last season at Ottawa, his longest coming from 46 yards. He finished as the Gee-Gees all-time scoring leader with 412 points, second in Canadian university history in field goals made (89) and third overall in scoring.

Despite those numbers, two CFL scouts requesting anonymity said Ward's measurables — he's generously listed at five foot seven — and questions about his leg strength worked against Ward in the '17 draft.

"Kickers, necessarily, aren't always going to be drafted certainly high and then it becomes a function of need," Desjardins said. "If you feel you have a kicker you're not normally going to keep an extra one around, even if you think he's pretty good, on your practice roster because practice roster guys are meant to help you with practice reps.

"But again, I think many teams probably had their guy at that point and wouldn't have anticipated needing another."

So Ward attended Ottawa's camp with a chip on his shoulder.

"I feel like I always have something to prove," he said. "I was kind of a walk-on at the University of Ottawa, I've had coaches who didn't call me back or just straight up said they weren't interested and so it was kind of a similar feeling last year.

"I wanted to come in and prove to the league I could be one of the most consistent guys and I think I've shown that. That's my strength, being consistent."

And being mentally tough.

"I think my mindset is also one of my strengths . . . I'm able to focus and be confident," Ward said. "I'm calm and collected, I don't get too down and when I get out there and make a kick, that one's done.

"If I have a miss like I did in the first game, we move on to the next one. I try to rely on what I've done in the past and then I know I can get back to that confidence and make the next one."

Returning for a fifth year at Ottawa, Ward said, was a blessing.

"I was a little confused regarding why I didn't even get a shot at a (CFL) camp anywhere," he said. "But going back to school was one of the best things that helped me . . . it kind of prepared me to know this is what I can kind of expect.

"You can't expect anything, you just have to do the best you can, hope you get your shot and when you do make the best of it. I think I've made the best of the opportunity I've been given (with Redblacks) but not having any real recognition last year was definitely fuel to try and be as good as I could be."

Surprisingly, Ward finds kicking in the CFL easier than in U Sports. That's because the Redblacks have a full-time longsnapper (Louis-Philippe Bourassa) and holder (Leone), which wasn't always the case with the Gee-Gees.

"You'd have a couple of longsnappers but nobody is a true longsnapper because they play other positions," he said. "And your holder might be a receiver or backup quarterback.

"You just don't get the mentality like you have at the pro level that this is your job. And you don't have time to work on the little things like we do now at practice."

Ward's critics have suggested a big reason for his CFL success is not having to face many long kicks. Ward has made all 42 attempts this season from 40 yards or less but has also hit 16-of-17 attempts outside of 40 yards and broke Vinatieri's record with a career-best boot.

"I've heard that before," Ward said. "I've had a few short ones but I've had quite a few longer ones and a couple in between.

Ward's brilliant campaign has generated much social media talk regarding what CFL awards he should be considered for. The obvious ones are top rookie and special-teams player but many believe Ward should also get strong consideration for the league's top Canadian and player honours.

Trouble is, Ward faces stiff competition within his own team for both awards. Slotback Brad Sinopoli (109 catches) is four short of breaking the CFL single-season record for most receptions by a Canadian while quarterback Trevor Harris is third overall in passing yards (4,849) and leads the league in completions (408) and completion percentage (69.7) and running back William Powell is the circuit's top rusher (1,362 yards).

"It's not up to me to decide," Ward said diplomatically. "If that's the conversation, then that's great but I'm not awards motivated.

"I'm here to help us win football games, that's the most important thing. The successes that come the result of that are extra bonuses that would be greatly appreciated but that's for you guys (media) to discuss."