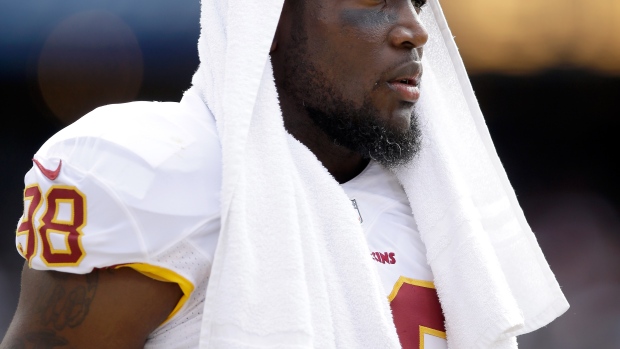 ASHBURN, Va. - Washington Redskins linebacker Brian Orakpo will miss the rest of the season because he needs surgery on a torn right pectoral muscle.

"The production may not be where people think it should be, but he's still been playing very good against the run and been disruptive in the passing game," coach Jay Gruden said Monday. "That'll be a big loss."

Orakpo, a three-time Pro Bowl selection, was hurt trying to make a tackle on a running play early in the fourth quarter of Washington's 19-17 victory over the Tennessee Titans on Sunday.

Orakpo twice has torn the pectoral muscle near his left shoulder in the past, including in Week 2 of the 2012 season.

He had a half-sack for the Redskins (2-5) this season.

"I know he's frustrated with his sack numbers, statistically, but he's been a big piece of our defence," Gruden said.

Now the question becomes whether Orakpo, a first-round draft pick by the Redskins in 2009, has played his last game for the team.

He was playing under a one-year deal worth about $11.5 million after the Redskins designated him as their franchise player.

"We'll have to evaluate that after the season," Gruden said.

Rookie linebacker Trent Murphy, a second-round pick out of Stanford, will start in Orakpo's spot next Monday night, when Washington plays at the Dallas Cowboys (6-1).