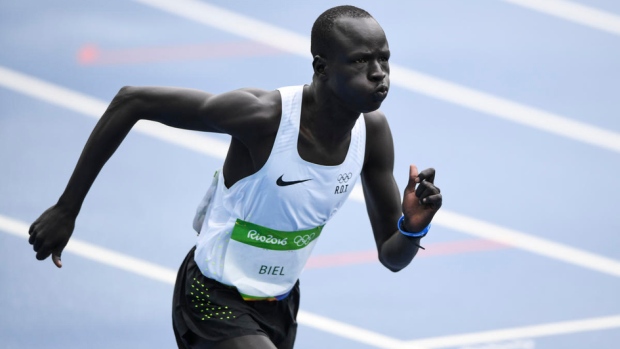 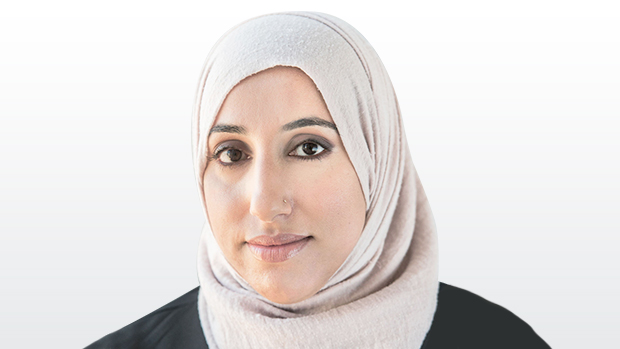 Long-distance runner Yiech Pur Biel started running out of necessity when he was 10 years old – he ran to save his life.

While fleeing South Sudan after being separated from his family during a period of violent conflict in the region, he sought refuge at Kakuma refugee camp in Kenya. Alone, he continued with his studies and played sports as much as possible.

A soccer player for most of his life, Biel decided to partake in a 10-kilmetre race for fun organized by the UNHCR (United Nations Refugee Agency) at Kakuma in 2015.

Biel ran barefoot and came in third place with a time of 35 minutes. It was at that point he decided to take up running and was soon singled out as a potential star during a trial session to identify refugee athletes.

He has since run road races, cross-country events and competed in track and field, but Biel enjoys half-marathons and longer distances most. He is a versatile athlete.

Biel made his debut as an Olympian at the 2016 Rio Olympics as part of the inaugural Refugee Olympic Team (ROT) and ran in the 800 metres event.

The ROT was an opportunity to showcase incredible athletes who had been displaced and sought asylum from their home countries. The goal was to draw attention to humanitarian crises while helping athletes keep their dreams alive. The ROT was a collaboration between the International Olympic Committee and the UNHCR.

The first ROT consisted of 10 athletes whose sports were swimming, judo and athletics.

The team was called “a symbol of hope” and their 10 ROT members’ dedication to sport was nothing but the best of determination in the face of devastating adversity. In many cases, sport was used to not only cope with loss of family, but to also help build new communities.

The impact that sport has in the lives of refugees can’t be overstated. Alphonso Davies, the Canadian men’s soccer wunderkind, was recently named as a Goodwill Ambassador to UNHCR.

Davies is a refugee from Liberia after his family fled Ghana when he was a baby. After his family was resettled in Canada, Davies began to play soccer – and the rest is history.

Biel is currently studying at college in the United States but intends to continue to run and advocate for the millions of refugees currently displaced by war, environmental change and political strife. He is one of the 60 athletes who are a part of the program supporting the Refugee Olympic and Paralympic teams.

He intends to be part of the ROT that will compete at the Tokyo Olympics this summer. The team will be announced in June.

In a recent interview with TSN, Biel discussed why athletics and running are so important, how sport can affect change in humanity, and from where he gathers his strength.

This interview has been edited for clarity and length.

At what point did you realize you were talented at running?

“Almost 10 years I had been playing football and you know in football it needs a lot of teamwork. Sometimes you lose a lot of games and you cannot blame yourself and you cannot blame your teammates. But in 2015, we had a competition in Kakuma refugee camp. I thought to myself, being in football for that long, ‘Can I try something else?’ So, I competed in the 10K and got third position. I thought ‘This is about determination; this is about hard working [sic] and if I can manage to come third place - and I run barefoot - why should I not choose something where I depend on myself?’ That was the beginning of my journey as an athlete in 2015.”

What are some of the main challenges refugees face (in camp and after settlement) that you want to draw attention to? 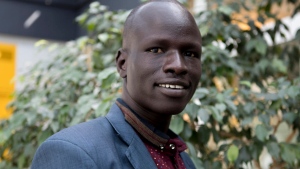 “Something that I can say is very important to refugees around the world, migrants, and internally displaced people ... the only place that they can find peace, love and unity is through sport. In 2016, when the Team Refugee entered Maracana Stadium in Rio – the 10 athletes [on the team], it was something that we will never forget. What the refugees need, and their challenge is access to sport facilities – something that they don’t have. Young people who are living in refugee camps and migrants cannot identify themselves that they need to engage themselves in sports. They don’t have a safe environment whereby they know ‘Today in the morning I am going to run,’ because they don’t know that they will be safe. And education is something that all children need to get. And I believe that through sport they can get that opportunity to go to school and educate themselves, and through sport and become a tool, they can change themself. Apart from that, we can have gender equality. Because young refugees who are coming from different situations, different backgrounds, different religions, they don’t allow themselves to be in sport because they don’t see sport as something that can change their lives.”

Of the 60 refugee-athletes currently in the UNHCR and IOC Team Refugee Training program, 25 compete in athletics. Why is running a huge part of the Team Refugee experience?

“Let me tell you, there are more runners than other sports because, you know, since we become refugees, our changing of life is about running. Escaping from war, escaping for survival, and now we are running towards opportunity. So, that has become part of our life. Running for survival, running for your life, and everything we need. We don’t have sports facilities like Tae Kwan Do and other stuff in refugee camps. Running you don't need equipment. You can decide as a person ‘Can I run today?’ and decide on your own. I mentioned that I ran barefoot; running is a path for everyone.”

How has the pandemic affected your training as an athlete?

“The pandemic has had a lot of impact on our lives as refugee athletes – those who are living in refugee camps. When the pandemic started, a lot of refugees went back to the camps where they cannot train. So, for us, to meet the standard for the Olympics by 2021 and train for it – it is about determination. We don’t need to lose our hope. There is something about representing millions of refugees around the world. It has been a challenge to get to training on time, getting the time to go out and run. I believe we will make it.”

Do you make a specific prayer before you run?

“Normally, I pray just to thank God. Because I believe if I wake up, I know that God has answered my prayers because I am alive. If I am doing a race, I just say ‘God, lead me on the way of whatever I am doing, and I will give you praise!’”

What do you think about while you are running?