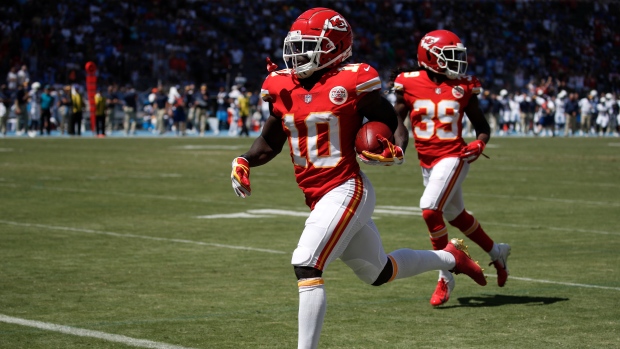 Chiefs coach Andy Reid knew the questions about Tyreek Hill were coming. He simply had no information to provide regarding the All-Pro star wide receiver who was involved in a domestic battery episode in suburban Kansas City earlier this month.

"There's no further statement, nothing has happened," Reid said of the team's investigation of the incident. "We don't know what happened and that's what we're trying to figure out."

The Overland Park (Kansas) Police Department identified a juvenile as the victim. Hill's fiancee, Crystal Espinal, is identified among "others involved." The couple has a 3-year-old son, Zev.

Reid noted that the Chiefs organization has talked about Hill's situation and the options, but the team needs "to let (the investigation) run its course."

In the middle of last season, the team quickly released star running back Kareem Hunt after a video showed him physically abusing a female in a Cleveland hotel. Hunt since has been signed by Cleveland and suspended for eight games by the NFL.

"If you make a move like that," Reid said of cutting Hunt, "it's pretty well thought out. You try to gather all the information."

The 25-year-old Hill has a history of domestic violence. While at Oklahoma State in 2014, Hill allegedly punched and choked Espinal when she was pregnant with their son. He was kicked off the team and pleaded guilty to domestic assault and battery by strangulation, and received three years of probation in the case.

The conviction was dismissed in August and expunged from his record after he finished probation.