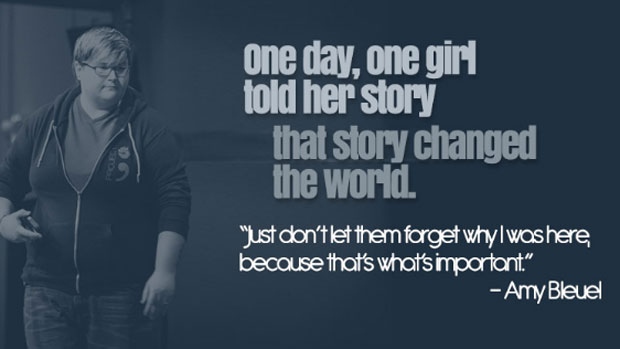 TSN's own Michael Landsberg speaks publicly about his personal battle with depression and considers his ability to help reduce the stigma of mental illness as his most important professional calling.

Michael pays tribute to Amy Bleuel, who died last month, but whose Project Semicolon initiative continues to help others in dealing with mental health issues.

I remember the exact time that my life changed. It was the moment that suicide stopped being someone else’s tragedy.  Until then, when I thought about suicide it was as if I was living in a beach house in Hawaii. Suicide was a distant war that had little relevance in my life.  On that day, suicide became my Pearl Harbor.  I couldn’t ignore it anymore.

It was 5:25pm on Aug. 31, 2011. Up until that point, I knew of many people who had taken their lives; but I didn’t know anyone who had.  That little word ‘of’ takes it from the macro to the micro. From a societal issue to a personal issue. From brain to heartfelt.

At 5:25pm - with the sun shining on me and in me - my world changed.  It was then that I learned that my friend Wade Belak had taken his life.

Since that moment I’ve learned of so many other suicides, spoken to dozens of survivors of attempts, and many, many others who were left behind.  Parents and children, brothers, and sisters – I’ve spoken to them all.  It’s not that they’re scarred. A scar is a healed wound.  These people are all still suffering the pain from an open wound.  The bleeding may have stopped, but the pain remains.

Since that moment, I’ve learned a lot about suicide, but nothing more important than this: suicide has one ally, one compadre, one accomplice - and that is silence.   Hear that?  That’s your father, mother, sister, brother and friend not crying out for help.

This conspiracy of silence needs to be broken.  Depression sufferers will often go to any lengths to not give up their secret. Like spies with precious information, they will keep their secrets no matter how intolerable the pain gets.

No one has tried harder or done more to break the silence than Amy Bleuel. Do you know the name? Likely not.  Being a mental health warrior is not exactly high profile. But in the community that I often hang out in, Amy Bleuel is a giant. For the past four years, she spoke about suicide in a way that few others have.  But even in that small group of warriors she stood out because Amy was 100 per cent genuine.  She was to suicide what teenager Ryan White was to AIDS, what Lou Gehrig has been to ALS and what Michael J. Fox is to Parkinson’s Disease.

Amy’s strength as a leader was in part because she was one of us. There’s no place in this fight for four-star generals in spiffy uniforms with medals and honors dripping off them. This is a battle fought by the grunts - the foot soldiers who battle every day for every inch of their lives. That was Amy.

On March 23, Amy died.  She was taken by the illness she fought to publicize.  She died at her own hand - guided by an illness that can often be unrelenting and merciless. The urge to end one’s life only fades when the pain fades. Amy’s pain never faded.

Amy started an initiative called Project Semicolon. I wish it had been around in 2011 when my buddy Wade was faced with his battle for survival. This initiative spread to every corner of the earth. And earlier this week, people celebrated World Semicolon Day.

Allow me to defer briefly to the symbol that Amy made famous - the semicolon.

The 14 English language punctuation symbols all gathered in one room.  The room was jammed to hear one of their own give the eulogy for Amy Bleuel.  Row after row - like lines on a page, they filled the pews and like some kind of undecipherable code, the symbols filled the page.

Once they had all filed in, it was obvious that there was tension.  First, there were the cliques; the apostrophes and the quotation marks all thought they were above everyone else. The dashes and the hyphens all had some weird identity crisis happening - they hated being mistaken for each other. The question marks and exclamation marks all hated the periods because they knew they were nothing without them.

But they were there because they owed it to Amy. Each was offered a chance to speak, but all deferred to the semicolon.

The semicolon waited for the room to settle.  The apostrophes took a while to settle because they acted like they owned the place.  Of course, the exclamation points were the last to shut up - everyone knew they couldn’t contain their excitement.

The semicolon began to speak, “Thank you all for coming. We are here because we lost someone precious to all of us - but semicolons like me are particularly crushed by the loss of Amy Bleuel.  Amy changed the way the world viewed us.  She did the unthinkable - she lifted us off the page and gave us relevance.  Amy gave me a life, a purpose, and a meaning.”

The semicolon continued to speak - overcome at times by emotion. “Amy took the most awkward and confusing of all the punctuation marks and gave us a purpose. She found a way for us - the mixed offspring of a period and a comma - to find a place in the world. She made us a symbol to all people who, like us semicolons, had been trying to find their own place in the world. We semicolons never felt like we belonged with the periods or the commas.  Now we stand alone - upright and proud of our uniqueness in a world where the stigma of being an unusual punctuation mark can be pervasive.”

The semicolon continued. “Amy Bleuel had it rough. None of us live our lives on flat ground. We all have hurdles and hills to climb and because they’re ours they can seem like they are higher than everyone else’s.  But learning about Amy’s, it’s clear that she had a monstrous accumulation of challenges, episodes, tragedies, and anything and everything else you can imagine.”

“She didn’t hide her tortured past.  By the time she was 18 she had been physically abused, sexually abused, raped, had become a ward of the state, self-harmed, and had attempted suicide.  At 18, her father took his own life.  Between 18 and 30 she suffered more of the same - life was a boot camp every day for Amy - where just surviving was winning.”

“In 2013, as she put it - she ‘found a purpose for her pain.’  She founded a not-for-profit called Project Semicolon.  This project quickly became life saving for more people than anyone will ever know.  When asked why she chose us semicolons, Amy said simply, ‘A semicolon is used when an author could’ve chosen to end their sentence, but chose not to.  The author is you and the sentence is your life.’ ”

“Her using the semicolon made an instant statement that was simple, portable, and meaningful.  And it caught on.  People all over the world went to tattoo parlors and asked for one of us.  This, of course, included many who would never have considered a tattoo before and most would never have even considered entering the freakish looking world of the tattoo and piercing parlor.  The thought is bizarrely wonderful; what possessed the banker, the doctor, the school principal to bravely enter such a place?  I’m smiling just thinking about it.”

Here’s why Amy meant so much to so many. Depression is impossible to understand if you haven’t felt it. Living with depression is sometimes like living in another country without speaking a word of the native language.

Depression is a language spoken only by those of us who have felt it. Many wonderful people try to learn this language; few, if any of them, can. The semicolon doesn’t explain to anyone what depression means. What it says is “I am part of the fight.” It’s a uniform that people can wear to be part of a revolution.

The semicolon continued. “Amy knew that suicide was always hovering over her like a drone.  That’s why she said many times, ‘Just don’t let them forget why I was here, because that’s what’s important.’ ”

“We will not forget.  We semicolons will continue to silently remind people that your story isn’t over yet. Your story will persevere in the hearts and minds of many - and on the calves and forearms and backsides of even more.  Sure, we lost our guide, but when the Sherpa falls, the climber doesn’t quit.  We continue the climb - even though it may be tougher.”

The semicolon stood upright, proud, and confident.  He finished his eulogy by inviting the parentheses up on stage.  Together the two of them stood side by side.  As they did, all the punctuations smiled.  Together they made a wink.  Amy would have liked that.

The semicolon was speaking for so many. I never fought in a traditional war. So when I say that Amy’s death made me feel like a soldier who lost a fellow warrior, I’m only guessing. I look at her death with the pragmatism of a soldier on the front lines where death is not uncommon. We lost a wonderful friend and leader, but we will go on. We will use our ammunition of sadness and anger, of pain and frustration, to motivate us to keep fighting this war.

Amy, I never met you, but I knew you. I never spoke to you, but you spoke to me. I never held your hand, but you held mine.

The lives you saved will forever mourn the life you couldn’t.