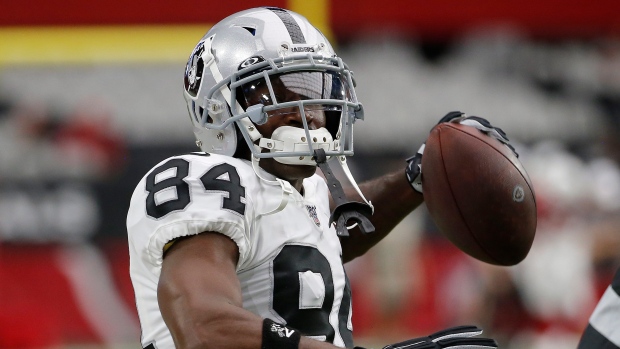 The Oakland Raiders star wide receiver has filed a new grievance against the National Football League in an attempt to be able to wear the helmet he wants, according to ESPN's Adam Schefter.

Raiders’ WR Antonio Brown filed a new grievance against the NFL in an attempt to be able to wear the helmet he wants, per source.

Brown, who reportedly left Raiders practice Sunday in frustration over not being able to wear a certain helmet, was back with the team on Monday according to multiple reports.

The latest development comes after Raiders general manager Mike Mayock called for Brown to be "all in or all out" Sunday.

"So from our perspective, it's time for him to be all in or all out," Mayock told reporters. "So we're hoping he's back soon. We've got 89 guys busting their tails. We are really excited about where this franchise is going and we hope A.B. is going to be a big part of it starting Week 1 against Denver."

Last week, Brown had a grievance turned down by the NFL which centred on the four-time All-Pro wanting to wear a helmet deemed unsafe by the league for on-field play. He left the team and briefly threatened to retire from football if he was not allowed to wear his preferred helmet but was back in camp soon after.

Brown has not yet appeared in a game for the Raiders this pre-season as he continues to recover from frostbite he sustained while using a cold therapy machine in France earlier in the summer.

The 31-year-old was acquired by Oakland in an off-season trade with the Pittsburgh Steelers.