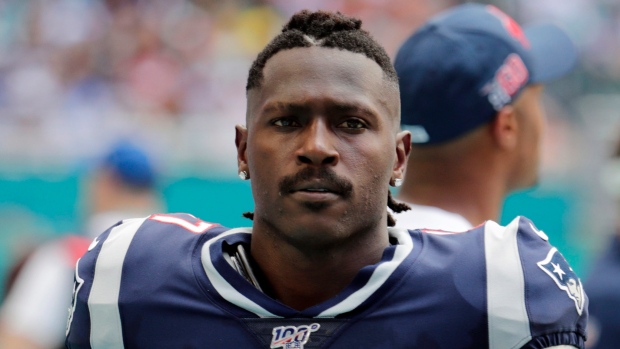 An arrest warrant has been issued for seven-time Pro Bowler Antonio Brown in Florida, according to reports.

The Hollywood (Florida) Police Department has an active warrant for Brown’s arrest Wednesday night for burglary with battery in reference to an incident which occurred on Tuesday.

The 31-year-old Brown, who played just one game this season with the New England Patriots after being released by the Las Vegas Raiders for off-the-field incidents, and his trainer, Glen Holt, allegedly physically struck the driver of a moving truck outside his residence, police said Tuesday.

A large police presence showed up at Brown’s home after a 911 call around 2 p.m., but police said they were not “successful” in locating Brown, who did not face charges at the time.

Holt was charged with one count of felony burglary and battery. He was booked into jail Tuesday evening.

The incident on Tuesday occurred just one week after Brown filmed himself yelling and cursing at Florida officers and the mother of his three children and also lashed out against police on social media.

Brown livestreamed a confrontation with his ex-girlfriend Chelsie Kyriss and Hollywood police outside of his home. His children appeared to have been in the video as he yelled profanities, while accusing Kyriss of trying to steal a Bentley that was parked in his driveway.

Last week, agent Drew Rosenhaus terminated his relationship with Brown, in the hopes of getting him to seek professional help.

Brown, who was cut following the Patriots’ Week 2 win over the Miami Dolphins, has remained in the public eye thanks to his social media posts, apologies, attacks and most recently his pursuit of a rap music career.

He was also brought in for a workout with the New Orleans Saints before their NFC wild-card game, a meeting he called a “publicity stunt.”

The NFL is still investigating Brown, who is a free agent after spending nine seasons with the Pittsburgh Steelers before he was traded to the Raiders last year and released, for allegations of sexual misconduct and assault.