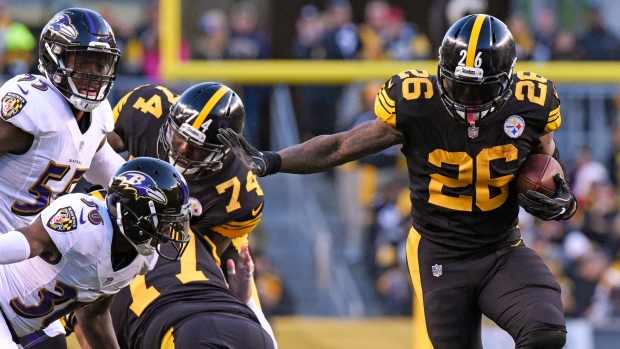 The holdout appears to be over.

Pro Bowl running back Le'Veon Bell will report to the Pittsburgh Steelers for their Week 7 bye, according to ESPN's Jeremy Fowler. Bell "definitely" plans to play for Pittsburgh this season, says Fowler.

The 26-year-old could make his debut Oct. 28 against the Cleveland Browns at Heinz Field.

Le'Veon Bell expects to report to the Steelers during the Week 7 bye, a source told @ESPN. Bell definitely plans to play football for the Steelers this season.

Reporting week 7 would mean that Le'Veon Bell would miss games against the Falcons, then the Bengals, but be back in time to play the Browns Oct. 28 in Pittsburgh.

ESPN's Adam Schefter notes that the Steelers would still be interested in listening to trade offers for Bell. The trade deadline is on Oct. 30.

Pittsburgh still is expected to be interested in listening to trade offers for RB Le'Veon Bell, per league sources. Bell now planning to report later this month would not dissuade the Steelers from making a deal that made sense.

Bell has been holding out and has missed the first four games of the season after the Steelers placed the franchise tag on him for the second straight year.

He rushed for 1,291 yards with nine touchdowns over 15 games in 2017 with the Steelers, his fifth year in Pittsburgh.

The Steelers selected the Michigan State product in the second round of the 2013 NFL Draft.

Bell is a three-time Pro Bowler.

Pittsburgh is 1-2-1 on the season and sit last in the AFC North.