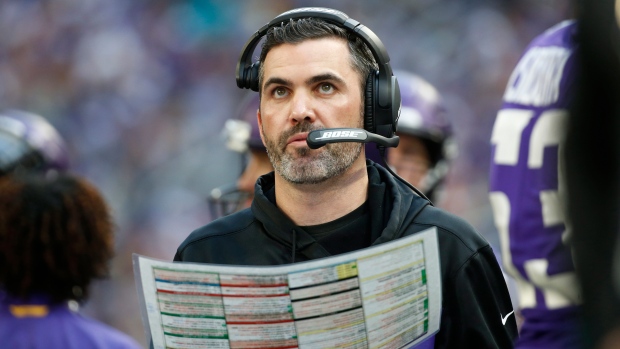 CLEVELAND — Kevin Stefanski coached running backs, tight ends and quarterbacks in Minnesota. He's about to take on his most challenging group yet — the Browns.

The Vikings offensive co-ordinator, who came close to getting Cleveland's job last year but finished second to Freddie Kitchens, was hired as the Browns new coach — their 10th since 1999 — on Sunday, a person familiar with the team's decision and plans told The Associated Press.

Stefanski agreed to accept the position a day after Minnesota's season ended with a 27-10 loss to the San Francisco 49ers in the NFC playoffs, according to the person who spoke to the AP on condition of anonymity because the sides have yet to finalize a contract. An official announcement is expected Monday, and Stefanski will be introduced early in the week.

The hiring of the 37-year-old Stefanski, considered one of pro football's rising young coaching stars, ends a deliberate, two-week search by the Browns, who cycle through coaches like no other NFL team and were the only ones without one until this weekend.

A year ago, Stefanski was a little known assistant when he so impressed the Browns during his interview that chief strategy officer Paul DePodesta recommended to owners Dee and Jimmy Haslam that they should hire him. However, the Haslams were swayed by then-general manager to hire Kitchens, and the results were atrocious.

The Browns went 6-10. Kitchens was fired. The team wasn't going to pass on Stefanski again.

He has gone from being a long shot to a big shot.

And now that they've got their coach, the Browns can focus on restructuring their front office around a new GM to replace Dorsey, who parted ways with Cleveland on Dec. 31 after after refusing to accept a reduced role.

On Saturday, the Browns requested permission to interview Eagles vice-president of football operations Andrew Berry, who spent three years in Cleveland as vice-president of player personnel. Berry reportedly favoured Stefanski during last year's search and may now have a chance to work alongside him.

Berry has not yet met with Haslam and there have been no interviews for the GM opening to this point, according to the person familiar with the decision to hire Stefanski.

A member of Minnesota's staff since 2006, Stefanski is Cleveland's 10th full-time coach since the franchise's expansion rebirth in 1999 and the sixth hired by the Haslams since they bought the team in 2012 from Randy Lerner, who was widely criticized by Browns fans during his tenure but is now viewed as more stable than the Haslams.

And while Stefanski's hiring was a positive for the Browns, it also underscores the NFL's continued struggles in hiring minority head coaches. Dallas, Carolina, Washington and the New York Giants also filled vacancies. Of those hires, only the Redskins' Ron Rivera, who previously coached Carolina, is a minority.

Stefanski appealed to the Browns for numerous reasons with his work to improve Vikings quarterback Kirk Cousins at the top of his pluses. Under Stefanski's watch this season, Cousins went 10-6 as a starter and posted a career-best 107.4 rating with 26 touchdown passes and only six interceptions.

The Browns hope he has a similar effect with Baker Mayfield, who struggled with accuracy and consistency in his second season after breaking the league rookie record for TD passes in 2018.

Stefanski hasn't even signed his contract in Cleveland, but the Vikings already miss him.

“He’s a great leader,” wide receiver Adam Thielen said. ”I have so much respect for him and the way he carries out his life, his business. I’m obviously thankful for his support and everything he’s done for me over the years since he’s been here — since I’ve been here. Happy for him.”

Stefanski will inherit a Browns roster that includes plenty of offensive talent with Mayfield, wide receivers Odell Beckham Jr. and Jarvis Landry, and running back Nick Chubb. The group never meshed under Kitchens, who struggled as a play caller while juggling other duties.

Stefanski will have to hire a co-ordinator and staff. It's possible he could bring QBs coach Klint Kubiak with him. The son of former NFL coach Gary Kubiak worked with Mayfield at the Senior Bowl two years ago.

Stefanski was a survivor in Minnesota. He held onto his job after coach Brad Childress was fired in 2006, and when Leslie Frazier lost his job after the 2013 season.

In six years on Mike Zimmer's staff, Stefanski proved valuable enough that the team blocked him in 2018 from becoming Pat Shurmur’s offensive co-ordinator with the New York Giants.

Stefanski was promoted to offensive co-ordinator for the final three games of 2018 after Zimmer fired John DeFilippo. He had the interim title shed in 2019, helping the Vikings jump from 19th to eighth in points and from 20th to 16th in yards in league rankings.

Stefanski drew praise throughout the organization for his eagerness to adjust and work with and integrate new offensive adviser Gary Kubiak’s scheme, while calling plays on a full-time basis for the first time.

“Through the good times and the bad times, he’s the same guy,” Thielen said. “He’s not going to throw anybody under the bus. He’s going to take ownership and do whatever it takes to put you in the best position as an offence.”