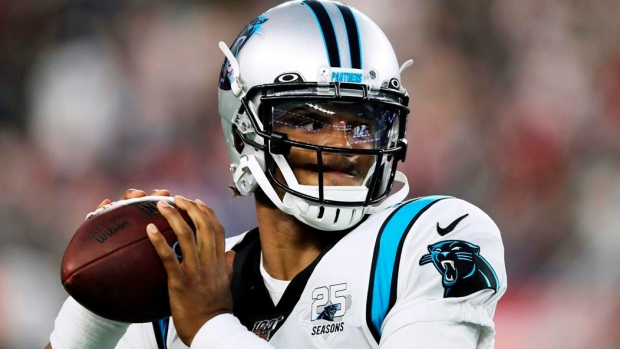 The Carolina Panthers and new head coach Matt Rhule are moving forward with Cam Newton as their starting quarterback, according to a report from NFL Network's Ian Rapoport.

A lot can still happen in the coming months, but as of now, the #Panthers are moving forward with Cam Newton as their starting QB, sources say. While his foot is healing well, it will be several months until it’s game-ready — a timeline that complicates any potential trade.

Rapoport added a lot can still happen in the coming months, but as of now the Panthers are considering Newton their starter at the QB position. Rapoport also reported that while Newton's injured foot is healing well, he is still a long way away from being game-ready, which would complicate any potential trade.

#Panthers coach Matt Rhule and his staff have been encouraged with how Cam Newton has treated his rehab and how intent he is to get back to top form. He’s spent plenty of time in town. With so much to rebuild in other areas, having a legit starter in place eases the transition. https://t.co/LIvqQDj5b5

Rhule and his staff have been encouraged with Newton's approach to rehab and getting back to top form, per Rapoport, with the former MVP having spent plenty of time in Carolina this off-season.

Newton missed all but two games last season with his foot injury. Prior to last year the 30-year-old had missed only five games in his nine-year career.

The Auburn product has been the Panthers starting QB since the team drafted him first overall in 2011.