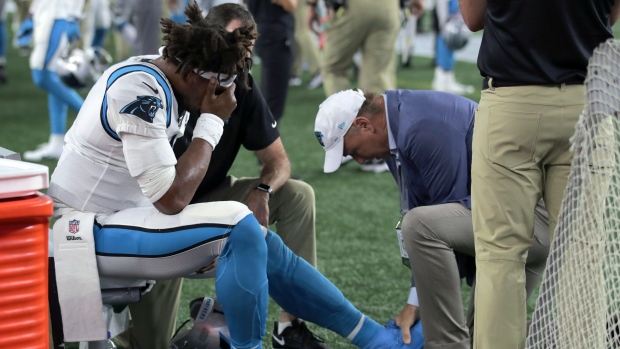 According to NFL Insider Ian Rapoport, Carolina Panthers quarterback Cam Newton is still in a walking boot today as he continues to deal with a re-aggravation of his foot injury.

#Panthers QB Cam Newton is still in a walking boot today as he battles a re-aggravation of his mid-foot sprain, source says. The team will know more about his status soon. If he can practice, he’s got a shot at Sunday. If he doesn’t practice, it’s unlikely he plays.

The team is expected to know more about his status soon. Rapoport says if Newton can practise, he has a shot at playing on Sunday against the Arizona Cardinals but if he doesn't, it's unlikely he plays.

Newton, 30, originally sprained his left foot in Carolina's third preseason game against the Patriots but returned in time for the regular season opener.

He has yet to throw a touchdown pass this season with one interception and ranks 31st in the NFL in passer efficiency rating (71) among qualifying QBs and has completed just 56 per cent of his passes for 572 yards.